Sage grouse experts representing many stakeholders and partners of the Sage Grouse Initiative converged in Minden, Nevada, yesterday for a high-profile forum aimed at solving a key conservation issue for bi-state sage grouse that straddle the Nevada-California border: the expansion of pinyon and juniper forests into historic sagebrush-steppe.

SGI Webinar: Intro to Greater Sage-Grouse Conservation in the U.S.

Sage grouse experts representing many stakeholders and partners of the Sage Grouse Initiative converged in Minden, Nevada, yesterday for a high-profile forum aimed at solving a key conservation issue for bi-state sage grouse that straddle the Nevada-California border: the expansion of pinyon and juniper forests into historic sagebrush-steppe.

After a day of productive workshops, the group heads to the field to see the treatments that are assuring sage grouse have a home and the rangelands are as healthy as possible.

The Bi-State Local Area Working Group plays a pivotal role in a success story for proactive conservation that’s turning the tide for the bi-state sage grouse. On the Nevada-California state line, a geographically distinct population of sage grouse once faced a precarious future. Today, that’s changed. A forward-thinking group of people representing ranchers, agencies, conservation groups, private citizens, and universities came together in 2002 to form the Bi-State Local Area Working Group. They agreed to work across borders of land and values for the common good of sage grouse. In 2012, they released the Bi-State Action Plan: Past, Present and Future Actions for Conservation of the Greater Sage-Grouse Bi-State Distinct Population Segment. The plan steered Sage Grouse Initiative dollars to where they were needed most: funding and leveraging more dollars for voluntary conservation easements that keep private ranchlands intact. Easements and invasive conifer removal are the two top conservation actions identified in the Bi-State Action Plan.

In June of 2014, the U.S. Department of Agriculture, Bureau of Land Management and other Bi-State partners announced a landmark agreement to accelerate and focus conservation efforts to fully carry out the Bi-State Action Plan. The sage grouse and the wildlife that share their range now face a bright future, potentially averting the need to list the bird under the Endangered Species Act. At the same time, ranchers with critical water resources bordering public lands can keep their lands intact and safe from subdivision. The $45 million commitment to restore this geographically distinct population of sage grouse gives plenty of hope for a win-win result.

This forum is a key step for the partners moving forward to carry out that historic commitment. By focusing on the removal of trees invading sage grouse range, managers are mimicking the role of nature in the past, when periodic fires swept through the area to clear the advance of native trees into the open sagebrush country.  While fire remains important, the dilemma today is that fires also set sagebrush back for many years. Without sagebrush, sage grouse cannot survive. In winter, close to 100 percent of their diet is sagebrush leaves. Strategic removal of advancing pinyon-junipers gives the birds the best chance to maintain important habitats. 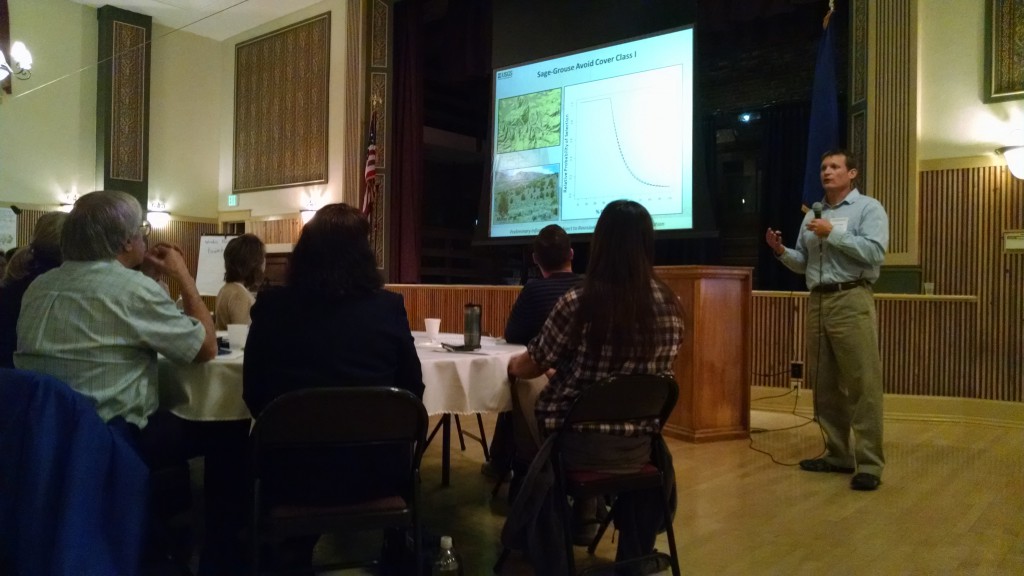