The Bureau of Land Management’s Bishop Field Office, the U.S. Forest Service’s Bridgeport District of the Humboldt-Toiyabe National Forest and the U.S. Department of Agriculture’s Natural Resources Conservation Service Minden Field Office recently  coordinated the marking of approximately 16 miles of fence to prevent sage-grouse mortalities or injuries. Fence marker and perch deterrent installation was completed in habitat for the Bi-State Distinct Population Segment (DPS) of sage-grouse. This DPS occurs in Lyon, Douglas, Mineral, Esmeralda and Carson City Counties in Nevada, and Alpine, Inyo and Mono Counties in California. On October 28, 2013 the US Fish and Wildlife Service (FWS) published a proposed rule to list the DPS as threatened under the Endangered Species Act. At the same time, the FWS proposed about 1.8 million acres of critical habitat.

Birds flying during low light conditions such as dawn or dusk can collide with fences, resulting in death or injury to the bird. Studies have shown that marking the fences with simple materials such as vinyl siding for houses can reduce fence strikes by up to 83 percent. The federal agencies teamed up to identify locations where fence strikes were either known to occur or likely to occur based on the fences proximity to leks and topography.  Leks are strutting grounds where male sage-grouse congregate in the spring to display for female grouse. Leks can attract more than 100 males to one location (Watch here: http://www.youtube.com/watch?v=ov9_72xLeF0). This congregation of birds can result in a high chance of collisions if fences are near leks and not visible. In many cases in the Bi-State DPS, fences have been relocated or converted to a style of fence that can be let down to prevent these collisions. 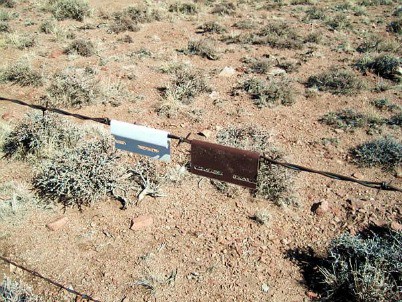 Two kinds of fencemarkers for two kinds of weather–white shows up without snow; brown with snow.

For this project, participants looked for remaining fences that might lead to collisions and marked them with brown and white markers. The brown markers are visible when there is snow on the ground and the white markers are visible against the sagebrush. The group experimented with some markers that were painted with glow in the dark paint and others that had strips of reflective tape on them to determine if one type was more visible than the other.

Private landowners, high school students, the Bridgeport Youth Conservation Corps and boy scouts helped staff from the three federal agencies put the fence markers up. In one area, large wooden fence posts were providing perches for raptors that can prey on grouse. In order to deter raptors from using these posts, perch deterrents were placed on posts across 1.85 miles of fence.

US Fish and Wildlife Service Biologist, Joanne Lowden, puts up fence markers. A view of Sweetwater Mountains in the back.
(Photo by Katrina Krause, NRCS/USFWS) 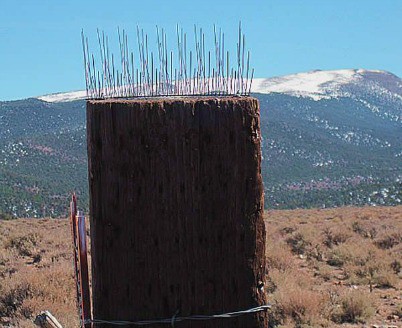 Perch deterrents on this tall structure prevent ravens and raptors from landing here, where they could more easily find prey.