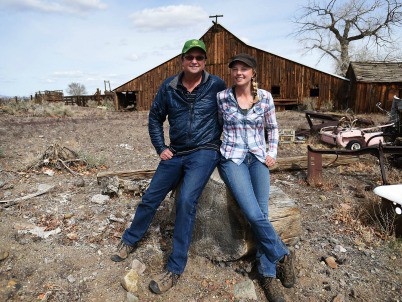 Read more on the Sage Grouse Initiative in the Bi-State.

(Photo to right: Rancher Steven Fulstone and his daughter Emily pose for a portrait on their property in the Smith Valley in Nevada on March 17, 2015. Credit: Jason Bean/RGJ)

The Natural Resources Conservation Service-led Sage Grouse Initiative is part of a major proactive conservation effort, providing  pinyon-juniper removal funding to help the Fulstone ranching family featured in this story.  April 2015 marks the month the U.S. Fish & Wildlife Service will decide whether or not to list the geographically distinct population of sage grouse of the Nevada/California border country.

The article highlights the commitments of all agencies and partners of the Bi-State Local Working Group to conserve the bi-state sage grouse, with a particular emphasis on the NRCS:

“In both Nevada and California, the conservation service (NRCS) has worked with ranchers and private landowners to enroll 7,300 acres into conservation easements that will keep land in agricultural production and avoid residential development that would degrade habitat. Some $13.1 million has been invested to date, with another $5.5 million targeted toward additional easements affecting 4,500 more acres of prime habitat now in the pipeline, Heater said.

Other efforts focus on the need to slow the steady encroachment of pinyon-juniper woodlands into sagebrush terrain. The thirsty trees rob water needed by sagebrush and other understory vegetation, essentially crowding out plants needed by sage grouse to survive. Sagebrush provides needed cover and during winter months, provides virtually all of the bird’s diet.

Since 2011, Heater’s agency has worked with landowners to treat terrain being overrun with pinyon-juniper, spending some $1.1 million to remove the moisture-sucking trees from 3,830 acres. Another 1,620 acres will be treated in 2015, with most of that work already done.

“I’m cautiously optimistic we can avoid a listing,” Heater said, adding that keeping ranches in operation and thus protecting the most important habitat may be the best solution for the bird in the long-run.

Many are pointing to a 2014 study conducted by the U.S. Geological Survey that indicates the bi-state sage grouse population is at least holding its own.

Of six “distinct population segments” studied in the bi-state area, bird populations were found to be stable in all but one between 2003 and 2012, according to the study.

“The preponderance of evidence suggests that sage grouse populations are stable,” reads the report prepared by Peter Coates of the USGS and other experts.”

NOTE: THANKS TO THE SAND COUNTY FOUNDATION FOR ITS ROLE IN SHOWCASING THE FULSTONE FAMILY AS WELL AS PART OF AN UPCOMING BOOKLET FEATURING RANCHERS TAKING VOLUNTARY PROACTIVE CONSERVATION MEASURES FOR SAGE GROUSE.