Tag, you’re it! How do researchers track sage grouse chicks?

Meet expert Mark Szczypinski with Montana Fish Wildlife and Parks. He tells us all about how to track sage grouse hens and their chicks.

Researchers in Montana carefully attach a lightweight radio transmitter to this days-old sage grouse chick to monitor its survival. Photo by Kenton Rowe.

Why do scientists want to tag chicks?

It helps us keep track of chick survival rates, seasonal movements, and habitat use. Plus, it also helps us understand sage grouse behavior. Here in eastern Montana, we’re learning a lot from tracking hens and their broods as part of a 10-year sage grouse research project that started in 2011. 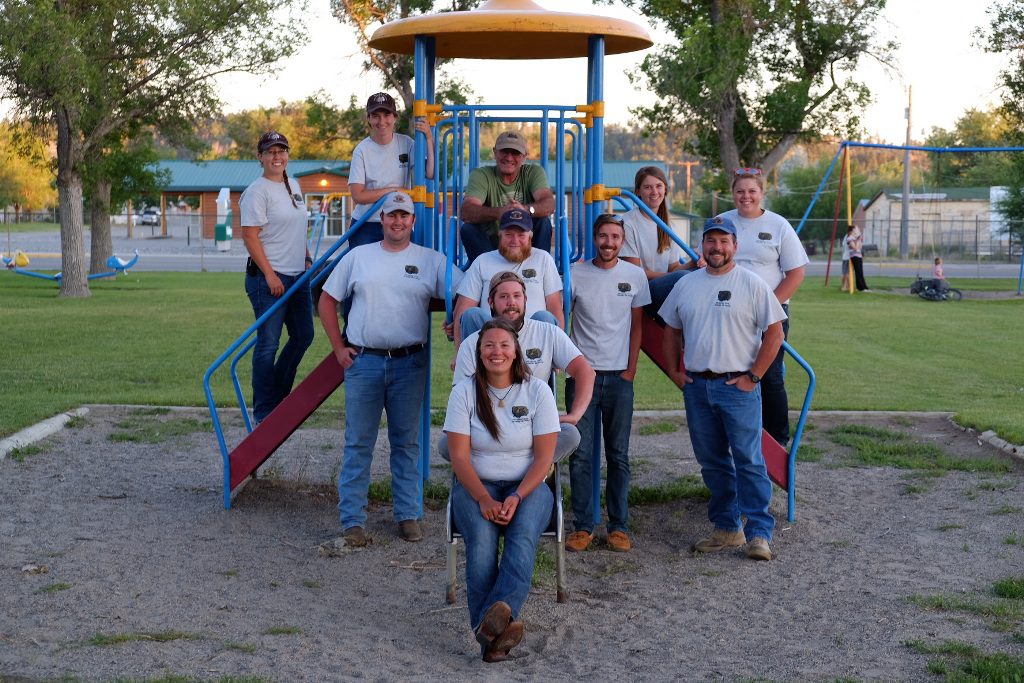 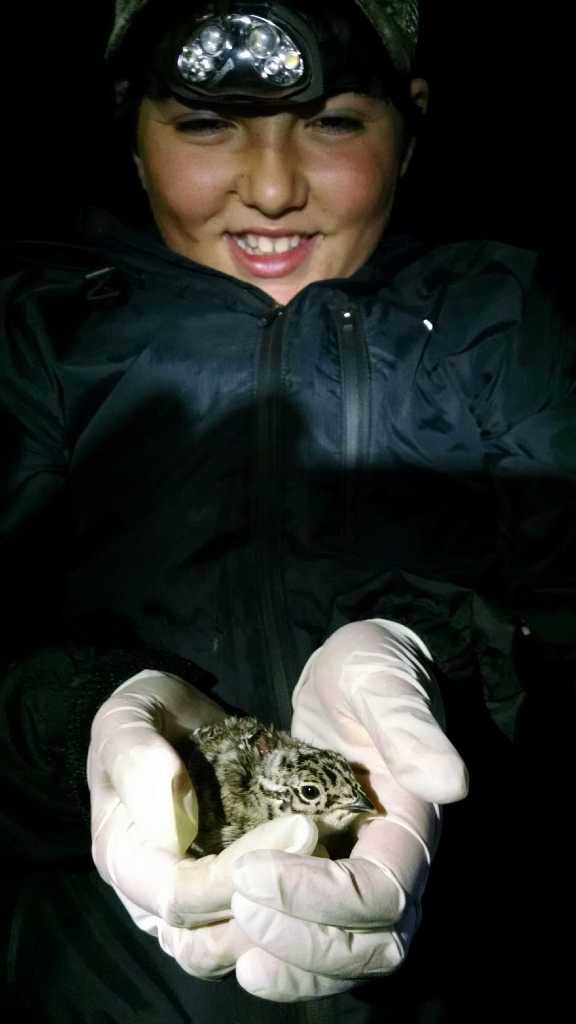 What’s your role in the Montana sage grouse research study?

I coordinate all of the field logistics from my base in Roundup, Montana. That means hiring and training 9 seasonal technicians, communicating with landowners, making sure all of the equipment is working, and capturing, tagging and monitoring birds myself, too.

The study area covers approximately a half-million acres, which makes it a huge undertaking. We have 7 pickup trucks and 6 ATVs to help us find and monitor the birds. Each tech is assigned a specific area, and is responsible for tagging and monitoring all of the birds within that area.

Landowner cooperation has been phenomenal during the project, which is important since 85% of the study area falls on privately-owned ranches. The funding provided by a host of public and private partners is also central to keeping the project going.

How many birds to you tag each year?

That depends. Before we can tag chicks, we have to first tag females so that we can find their nests. Our goal is to start each spring with 100 radio-marked hens. Usually, we have to capture about 25-40 hens in March and April to get us back up to 100 hens before nesting begins in late April.

It’s important to note that we use very different tags for fully-grown females versus small chicks. We fit adults with a VHF radio transmitter that are 25 g — about the size of the first joint as your thumb — and hangs like a necklace on the hen. For chicks, the transmitters are only 1.3g in weight (smaller than your pinky nail) with a 6-inch-long antenna attached. We suture these tiny tags with two small stitches to the skin on the chick’s back — similar to getting your ears pierced. 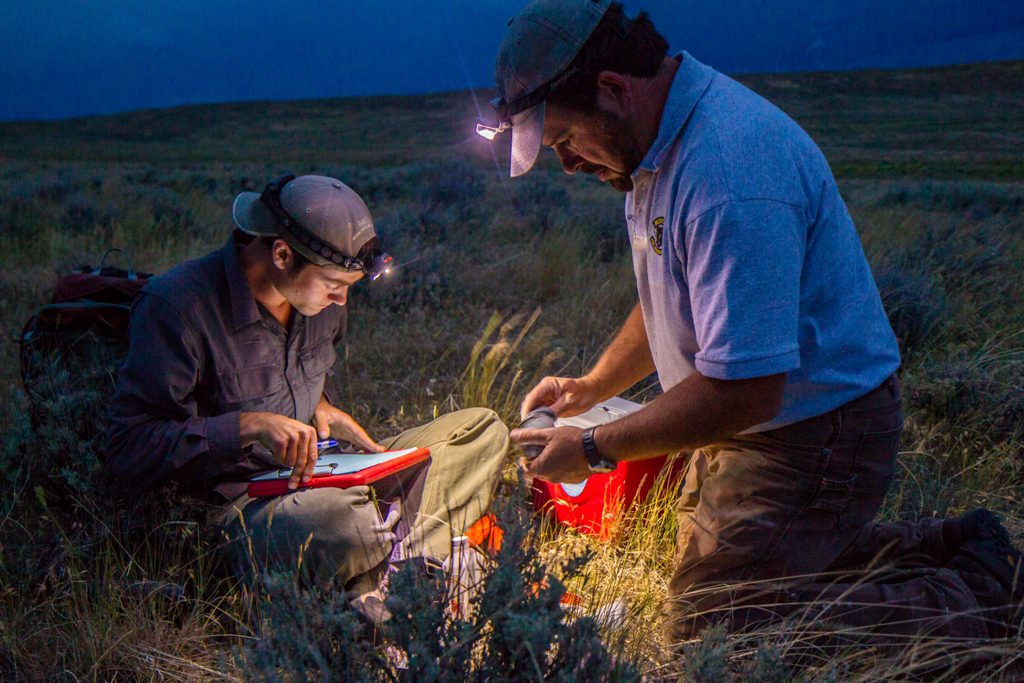 Mark (right) tags a chick with Joe Smith, a PhD student working on this study. Sage grouse tagging takes place in the dark, either after sunset or in the pre-dawn hours. Photo by Kenton Rowe.

So how do you know when a hen has hatched her brood?

We go out on the ground every other day during the April-May-June nesting season using handheld three-element Yagi antennas to listen for each hen’s VHF radio transmitter in order to get a her location — a process called telemetry. Once a hen’s location doesn’t change for two consecutive checks, we go in to confirm whether or not she is actually on a nest. If she is on a nest, we mark a point at least 100m away, which becomes the remote monitoring site for that nest.

Each nest is assigned an estimated hatch date which is 27 days from the first day we found the nest. Every two days after that first marking, we check to see if the hen is still on the nest by listening with telemetry equipment and evaluating if the compass bearing of the hen from the monitoring point has changed. This bearing won’t change more than a few degrees if the hen stays on the nest.

If the hen is absent from the nest around the estimated hatch date, we go in to see if one or more eggs hatched successfully. Hatched eggs will have an even break around the middle with a detached membrane inside and are usually still in the nest bowl. Often, one end of the shell will end up stacked inside the other end. 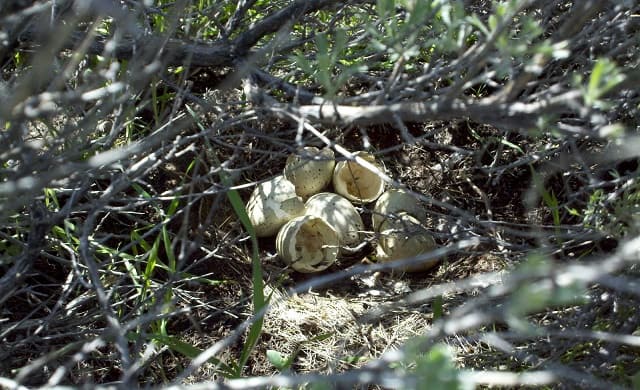 Sage grouse eggs usually crack around the center when the chicks hatch. The average clutch size is typically 6-10 eggs. Photo by John Severson.

What if a nest fails?

Nest predation is common, especially since sage grouse are ground nesters. The nest bowl is simply a shallow depression usually underneath a sagebush — easy access for hungry foxes, coyotes, snakes or ravens. If a hen is not on her nest, we go in to determine why she isn’t there. If the nest was found by a predator we often find evidence of predation: eggshells strewn about or eggs with holes in them.

If a nest fails, that hen goes back into our “tracking and monitoring” phase. It’s common for hens to make a second nest if her first nest fails, and occasionally even a third nest if the first two nests fail. We also continue to track the barren hens throughout the season to monitor their use of the surrounding sagebrush in relation to the different grazing treatments being used. 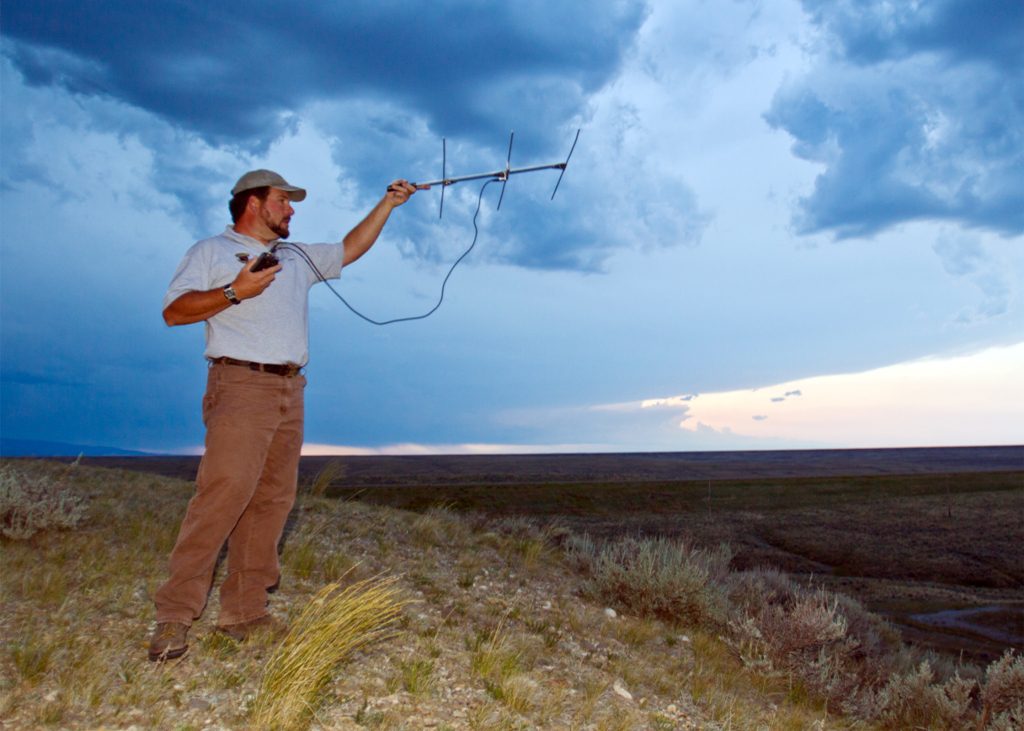 When do you tag the new chicks?

We try to tag chicks two days after they hatch. But it always depends on the weather. Chicks can’t thermoregulate for the first 7-10 days of their life, which is why they often roost under their mom, particularly at night. We do everything possible to keep the chicks plenty warm during the capture process. Though it’s usually late May or June when they hatch, it can still get cold here in Montana, especially since we do the tagging at night. We always tag as close to sunset as possible, and only if it’s over 50 degrees F and there’s no rain, wet soil, or wind. Sometimes, that means we don’t get to tag the chicks until they’re close to a week old. 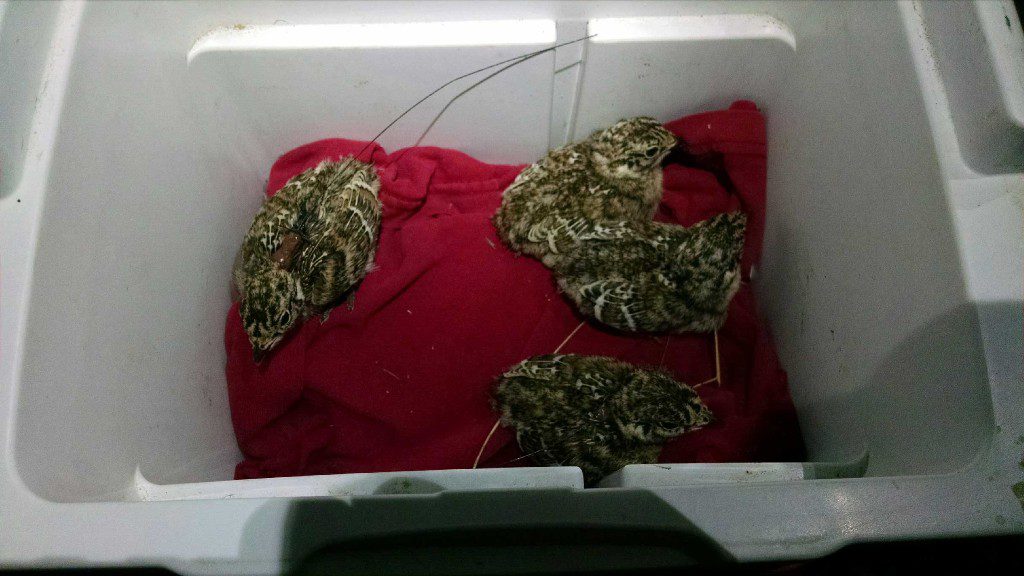 These two-day-old chicks stay warm on a hot water bottle within a cooler. The antennas on the tagged chicks are visible in the back. Photo by Mark Szczypinski.

We usually have three people in a team. Because the hen does not want to leave her brood (which is roosting underneath her), we are usually able to get close enough to the hen to touch her. After using telemetry to find the hen, we surround her and gently flush her off the chicks. Then we immediately scoop up all of the chicks and put them in an insulated cooler with a hot water bladder in the bottom, creating a warm environment. Most first nest attempts average 8-10 chicks, and second nest attempts usually yield about 6. From there, we pick two chicks randomly and weigh them. Each of these chicks then gets a tiny transmitter attached with two quick sutures.

When we’re done, we set all of the chicks back onto the ground as close to the capture area as we can. Once we leave, the mom comes back and gathers the brood under her. We always check on the hen and chicks the following day to make sure all of the chicks are okay. In total, we usually tag between 50-80 chicks each year from about 25-40 nests. 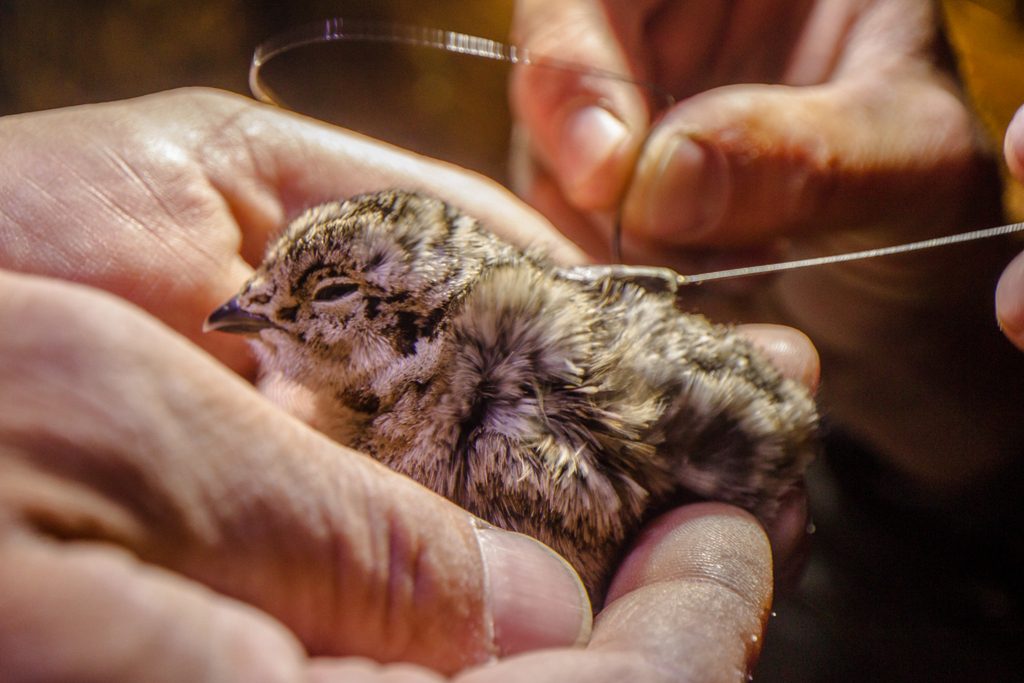 Each chick’s radio tag is smaller than a pinky nail, and secured quickly with two sutures. Photo by Kenton Rowe.

How do you check on the chicks once they’re tagged?

After tagging, we spend the rest of the summer monitoring and tracking the brood. Basically, if all three transmitters are heard in the same area and on a similar compass bearing and the signal strength seems the same, we assume the two chicks and the hen are all okay. If one signal is weaker or not in the same area as the other two signals, we go check on the bird. Otherwise, we stay about 30m away from the broods.

We monitor broods every other day for the first 14 days — since this is the time of highest mortality — then twice per week thereafter until the chicks reach 75 days of age, which is just before the batteries start to die on the chick transmitters. By mid-August and into September, we start recapturing the surviving chicks to fit them with an adult necklace transmitter since they’re big enough to carry it by then. We only tag the hens, and they’re old enough by then for us to identify the sex. 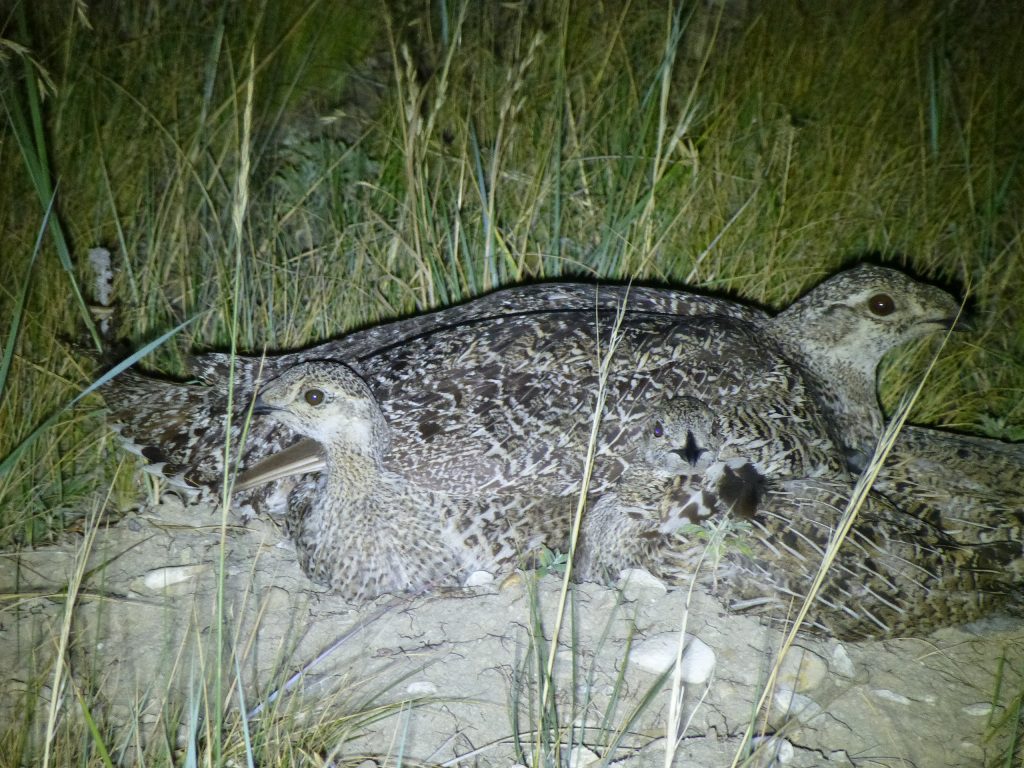 How do you know if a chick or hen is dead?

If a hen is motionless for more than 4 hours, the transmitter’s pulse doubles to indicate potential mortality. We do monthly survival checks from October through March by jumping in a small airplane to get locations on all of our tagged birds. After any mortalities during the spring and summer, we’re typically left with 75-90 hens to locate on each of these flights.

If any are dead, I go find the transmitter to recover it, and see if I can figure out what happened to the bird. Some years for whatever reason, we’ve had four mortalities per month during the fall and winter survival checks, but other years it’s only about one mortality per month.

During the first half of the study, the annual apparent survival estimates for sage grouse hens ranged from 57-82% from 2011 through 2015. For chicks, the survival estimates range from 12-22%. We look forward to continuing the tagging effort to have more data in the coming years. 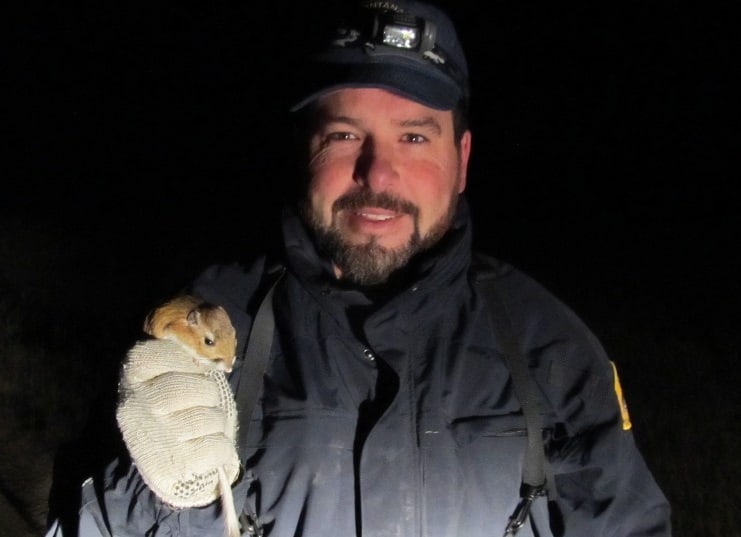 What’s the best part of your job?

I love the diversity of the things that I do, from hiring and training technicians to repairing field gear to tagging birds and interacting with all of the landowners in the area. My job changes with the seasons, which means I never get bored!

What are your favorite off-the-clock activities?

All things outdoors are right up my alley. Hunting, fishing, backpacking — you name it. I’ve lived in the Intermountain West for quite a while, and appreciate this landscape immensely.