Cutting to the Chase: Long-Term Success of Conifer Removal Depends on Both Cutting and Burning

Ask an Expert | How to use cutting and burning to most effectively restore sagebrush ecosystems experiencing conifer encroachment.

Birds of a Feather on Working Lands

Why You Should Know About the Eastern Redcedar Science Literacy Project 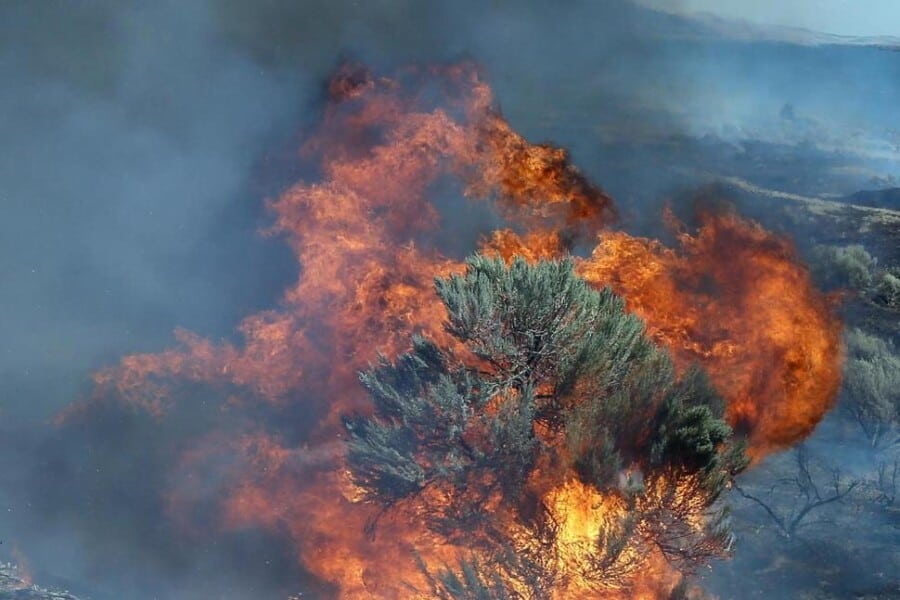 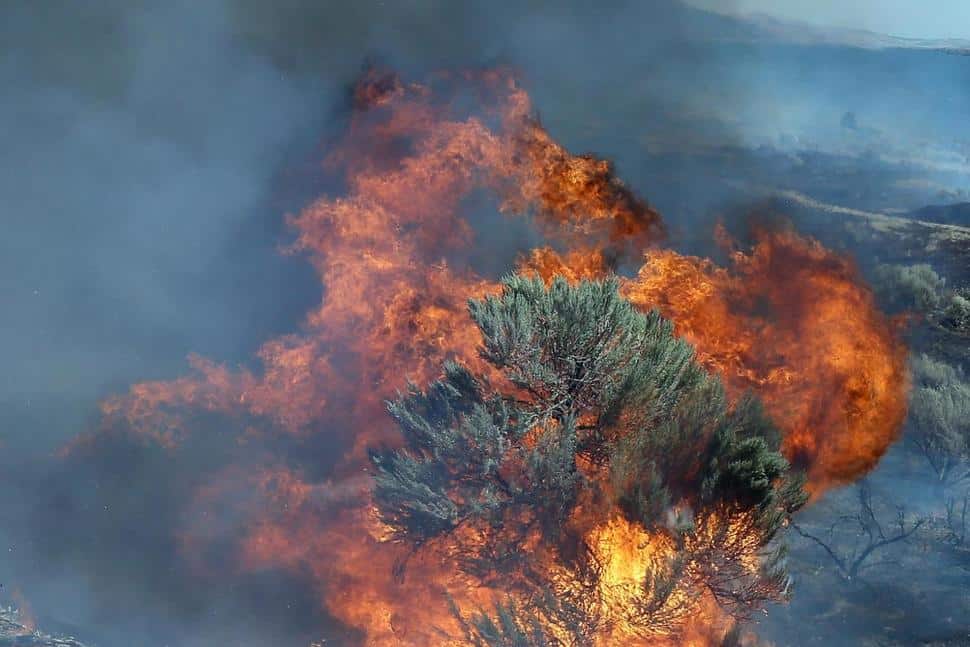 Tree encroachment is one of the biggest threats facing sagebrush and grassland landscapes. Even as few as one or two trees per acre cause sage grouse and lesser prairie-chickens to abandon otherwise suitable habitat. Additionally, encroaching conifers suck up water that sustains native forbs and grasses, reduce biodiversity, and increase fire severity in sagebrush and prairie landscapes. 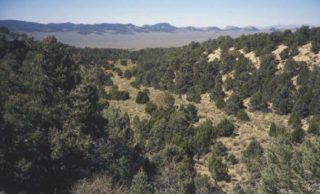 Conifer encroachment into sagebrush-steppe is a threat to sage grouse and a significant management challenge.

But these effects are reversible: A long-term, SGI-supported study in Oregon showed that when encroaching conifers are removed in targeted, sustained efforts, sage grouse populations grow. Studies in lesser prairie-chicken country have shown similar findings.

These studies add to a body of evidence that shows removing encroaching conifer trees like juniper and eastern redcedar improves habitat for sage grouse, lesser prairie-chickens and other wildlife, while benefiting livestock and ranchers. But what are the most effective methods for removing conifer trees?

To better understand this study and its conclusions, we reached out to two of the study’s principal authors, Kirk Davies and Chad Boyd, both from the USDA-ARS.

What was the main goal of your research?

Our goal was to compare cutting and prescribed fire as juniper management tools with respect to how long it takes juniper to return following treatment and the effects of treatment on non-target vegetation like shrubs and grasses.

Your paper notes that fire played a key role in maintaining healthy sagebrush landscapes historically because it prevented woody species like juniper trees from expanding into sagebrush-steppe landscapes. That’s no longer happening. Why not?

A couple of things. First, historical grazing during the latter 1800’s and early 1900’s was very different than the seasonal grazing and periodic rest practiced today. Records from the northern Great Basin indicate that historical stocking levels often exceeded carrying capacity and grazing often took place on a year-round basis. Additionally, historical grazing on public domain lands was first-come-first-served, which created a competitive environment for forage resources among grazers. These historical practices created a severe reduction in fine fuels which decreased fire frequency within the juniper zone.

Published data indicate that it was during this relatively fire-free period that juniper establishment increased dramatically. Following World War II, an influx of surplus vehicles, aircraft, and equipment greatly increased the effectiveness of fire-suppression operations, further diminishing the presence of fire within the juniper zone and allowing for reproduction and expansion of juniper populations. Continued effective fire suppression has allowed even more juniper expansion in sagebrush communities.

Are there potentially negative impacts from using fire to control woody plants in sagebrush country?

We see fire as one tool in the toolbox. In rangeland management, silver bullets don’t exist, and all tools need to be applied within a context that makes sense relative to a management objective. For example, if patches of juniper are encroaching into otherwise intact plant communities within priority sage-grouse habitat, and if management has the logistical and financial capacity to control juniper with cutting, then cutting might make more sense than fire. Alternatively, if a larger landscape has been encroached by juniper to the extent that it no longer functions as sage-grouse habitat, then fire might make more sense. Bottom line, keep all the tools in the tool box and use those tools where they make most sense relative to management objectives.

Managers who are considering using prescribed fire to control juniper have to think carefully about the condition of the understory and what that might mean to post-fire recovery dynamics. For example, in areas where juniper woodland development has proceeded to the point of closed juniper stands, the understory conditions are diminished. When this diminished understory experiences a severe fire (due to heavy woody fuel loading from the dense juniper stands), extended post-fire recovery periods are often the result, making prescribed fire a potentially risky proposition. These types of situations may require additional treatments such as seeding understory species and possibly weed control.

Exotic annual grasses like cheatgrass, medusahead, and ventenata are a real threat to the sagebrush sea, and I’ve read that they can infest areas following fires. Is there a way to use fire without exacerbating the annual grass problem facing our western rangelands? 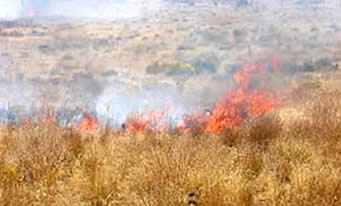 Fire surrogates are treatments that attempt to convey effects similar to fire. In this case, fire surrogates are treatments that control junipers. Cutting junipers would be an example of a fire surrogate in this system. Cutting juniper can help restore sagebrush landscapes because it can result in a more immediate return of sagebrush dominance. Cutting or other mechanical treatments of juniper can also be used in areas where prescribed fire is not acceptable or practical, such as near human infrastructure.

Our study highlights that both cutting (a fire surrogate) and prescribed fire are critical to restoring sagebrush landscapes. Cutting can result in “instant” habitat (with adequate pre-treatment of the understory). The downside of cutting is the potential for a relatively rapid return of juniper and consequent loss of sagebrush.

Fire delays the return of juniper more than cutting, but the downside of fire is that it kills big sagebrush. This means the benefits to sage-grouse will be delayed relative to cutting because it takes a while for sagebrush to regrow. However, once sagebrush abundance has recovered, it will last for a longer period of time relative to cutting. In fact, sagebrush cover was estimated be ≥10% for 52 years in burned areas compared to only 36 years in cut areas. 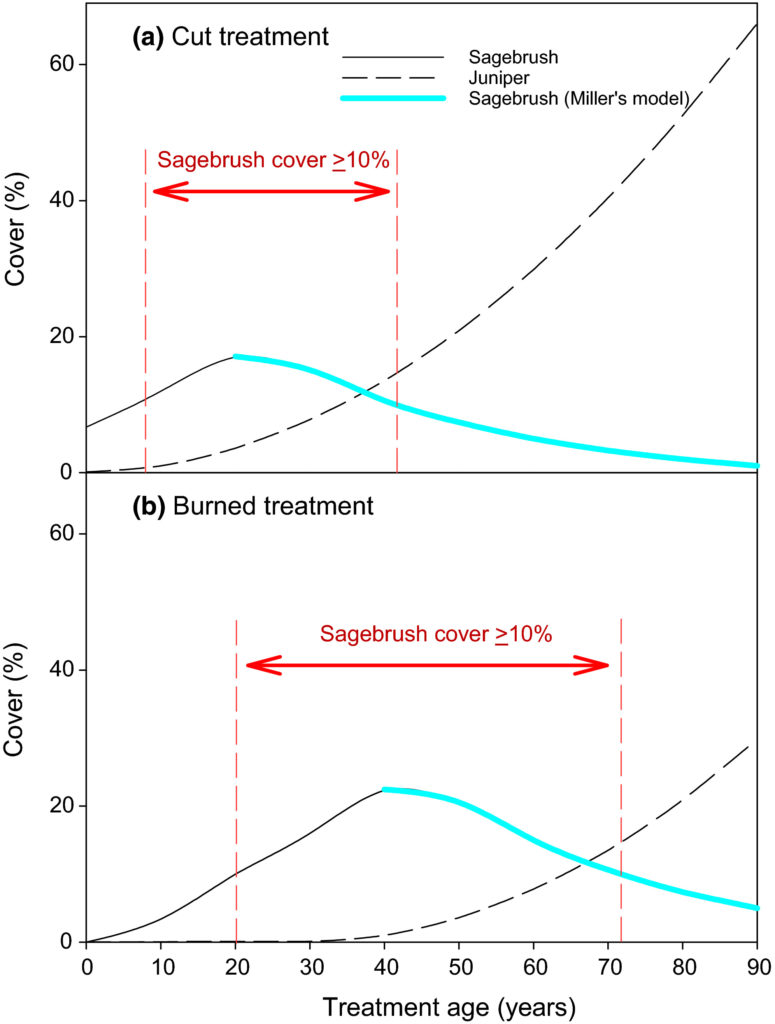 Estimated mountain big sagebrush cover after cutting (a) and burning (b) treatments applied to control juniper over 90 years post‐treatment adjusted for the estimated effects of juniper cover on sagebrush cover (blue line) using Miller’s model (Miller et al., 2000). For more detailed information on this figure, click on the image to find the full paper.

Two reasons. First, fire decreases the juniper seedbank and cutting does not. If fires burn completely, juniper seeds are effectively removed from the area. The net effect is to delay the onset of juniper succession and increase effective lifetime of fire-treated areas relative to cut areas. Second, cutting often misses very small juniper seedlings, fire generally does not. Following cutting, these small seedlings are released from competition with larger trees and often grow at accelerated rates which decreases the treatment lifetime.

Doesn’t burning conifers still leave tall structures that sage grouse avoid present on the landscape? Will grouse use areas where conifers have been burned, or do they still avoid them even though the conifers themselves are no longer alive?

We’ll leave the avoidance part of that question to others more qualified to answer it. But, yes, fire will leave behind juniper skeletons that can last for decades.

Were there any surprises that came from your research?

Yes, one surprise was the lack of an increase in exotic annual grasses with fire compared with cutting. This is probably because site conditions and perennial bunchgrass abundance largely determine exotic annual grass response to juniper removal, not individual treatments.

It sounds like both cutting and burning provide the holistic management needed to control encroaching conifers for the long term. What role does each play in the long-term management of sagebrush-steppe?

Again, it’s about matching management objectives with treatment. In high-priority sage grouse habitat, managers might choose to treat with cutting and apply the treatment more frequently. In larger landscapes of less value to sage-grouse (i.e., due to the prevalence of juniper), fire may make more sense. We are not here to promote fire as the best juniper management tool. But at the same time, pragmatically speaking, we realize that we are not going to cut our way out of the current juniper situation; the problem is simply too big and cutting is simply too logistically and financially expensive. Making progress on juniper is going to involve a fully stocked toolbox.  Managers need to apply the tools where they make the most sense relative to management objectives and logistical and financial capacities.

You both work for the USDA Agricultural Research Service. What does the ARS do?

ARS is a problem-solving organization. Much of the work in ARS focuses on traditional crop and animal production, as well as human nutrition. Our work at the Burns location is all about providing the science needed to make sound rangeland and livestock management decisions. In the northern Great Basin, management challenges for agricultural producers/rangeland managers are really the same as being experienced by sage-grouse habitat managers: altered fire regimes, expanding native conifer populations, and invading exotic annual grasses. Thus, the bulk of our work in Burns centers on those three topic areas.

What do you like to do when you’re not out in the field?

Chad: In no particular order, and in the company of my family: camp, hunt, fish, run, ski, and play guitar. 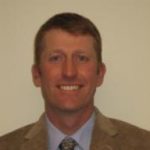