Home > The Wildlife > Sage Grouse > About the Bird

About the Sage Grouse

Habitat
Vast open spaces with hot, dry summers and cold winters that are dominated by sagebrush, native grasses and wildflowers. Some sage grouse need as much as 230 square miles for their home range.

Food
Sagebrush leaves year-round, augmented seasonally by other soft plant leaves, stems, and buds as well as insects. Since they lack the well-developed gizzard that many other birds have, sage grouse don’t eat seeds.

Appearance
The largest grouse in North America, this upland bird has a long spiky tail feathers, black belly, and camouflage plumage. Males are nearly twice as large as females and more colorful.

Flight
Although sage grouse prefer to walk, they're strong fliers (despite heavy bodies) with recorded speeds of up to 50 mph and single flight distances of up to 6 miles. 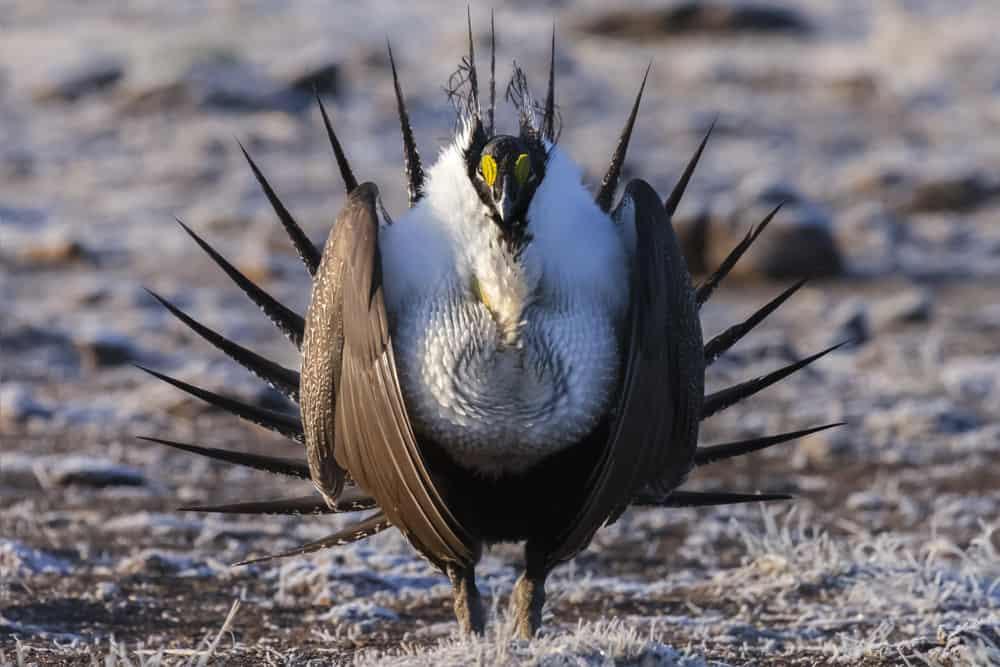 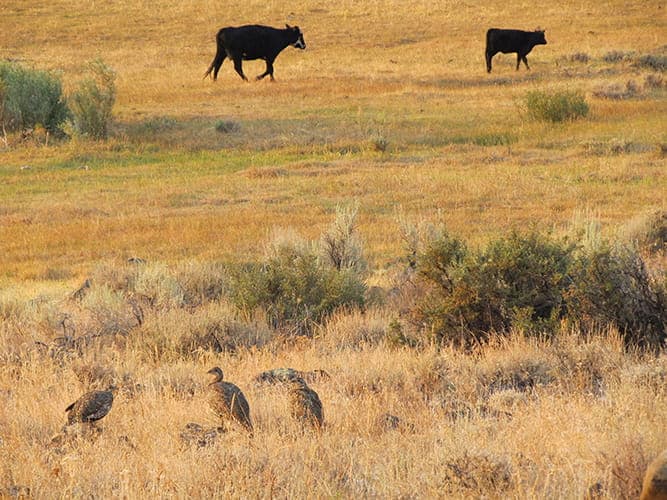 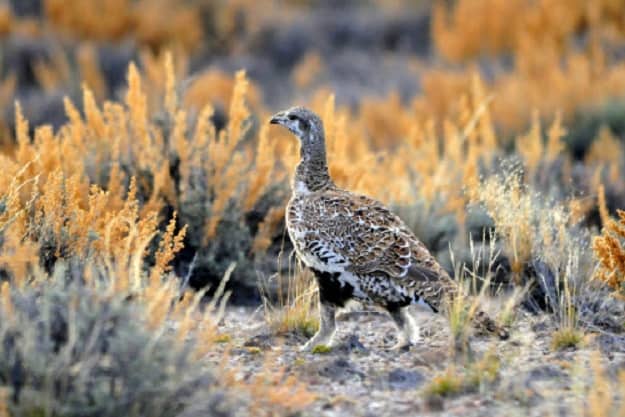 Female sage grouse are smaller and less showy than males, but they’re in charge when it comes to mating since they pick which male they want to mate with. Photo: Tom Koerner, USFWS

Centrocercus urophasianus - The most widespread sage grouse, it can be found in 11 western states. 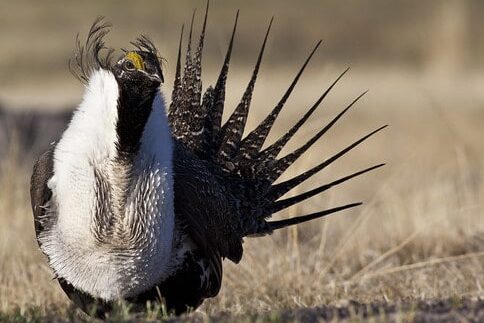 Centrocercus urophasianus -  A geographically distinct sub-population of greater sage-grouse that lives on the California/Nevada border. 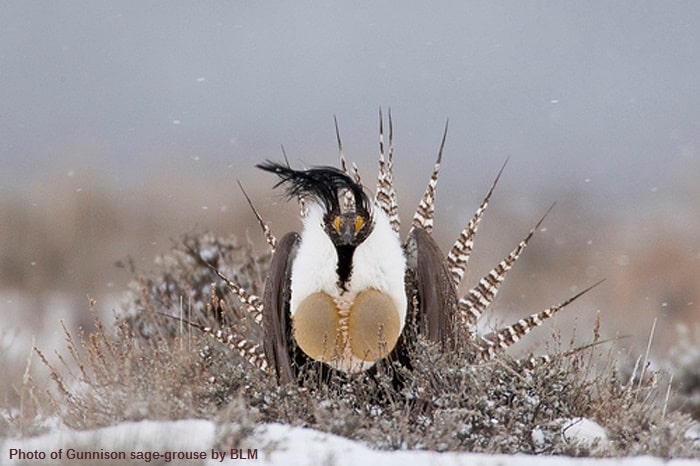 Centrocercus minimus - Lives in portions of Colorado and Utah. Smaller than greater sage-grouse, with a different mating call and tail-feather pattern. 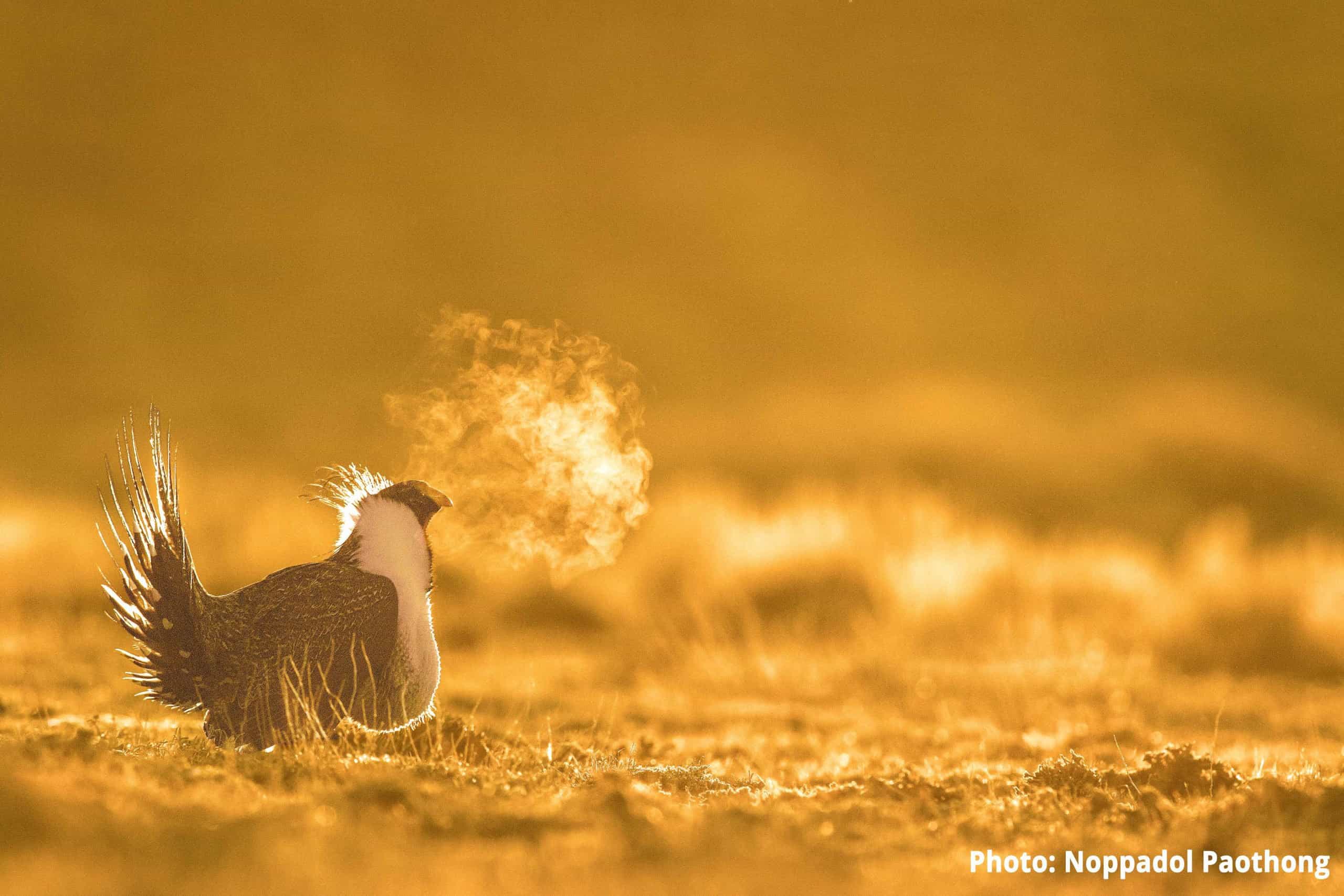 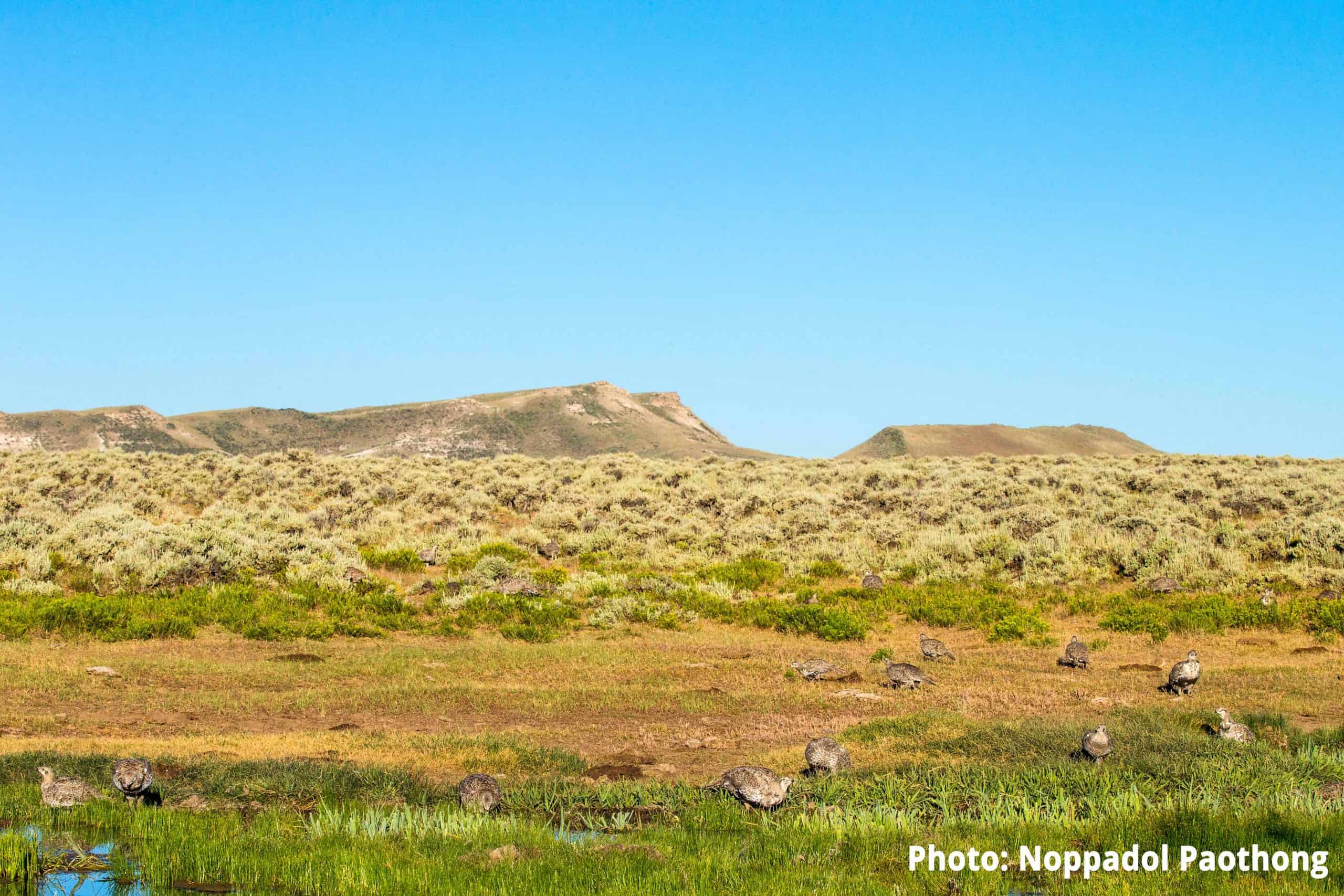 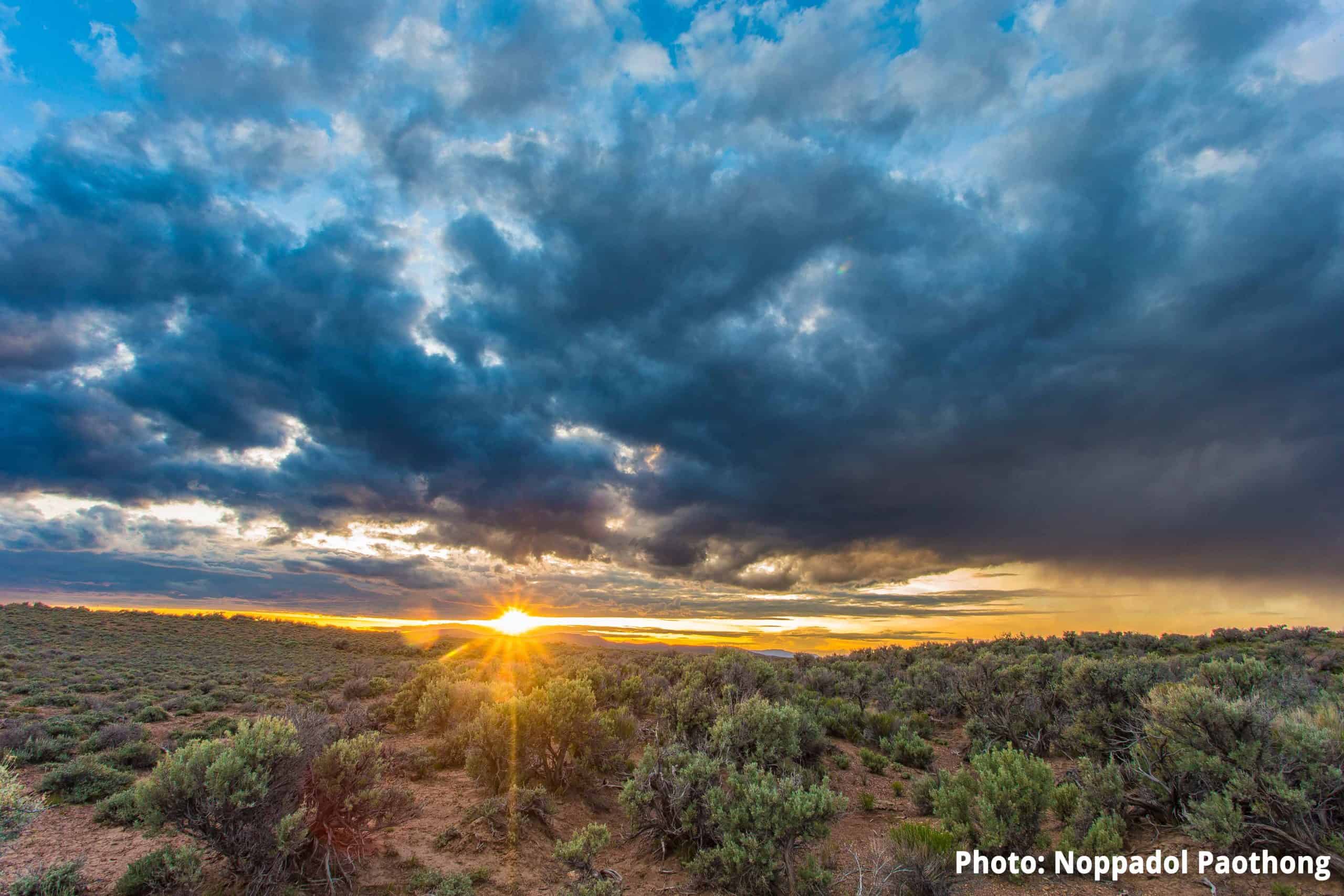 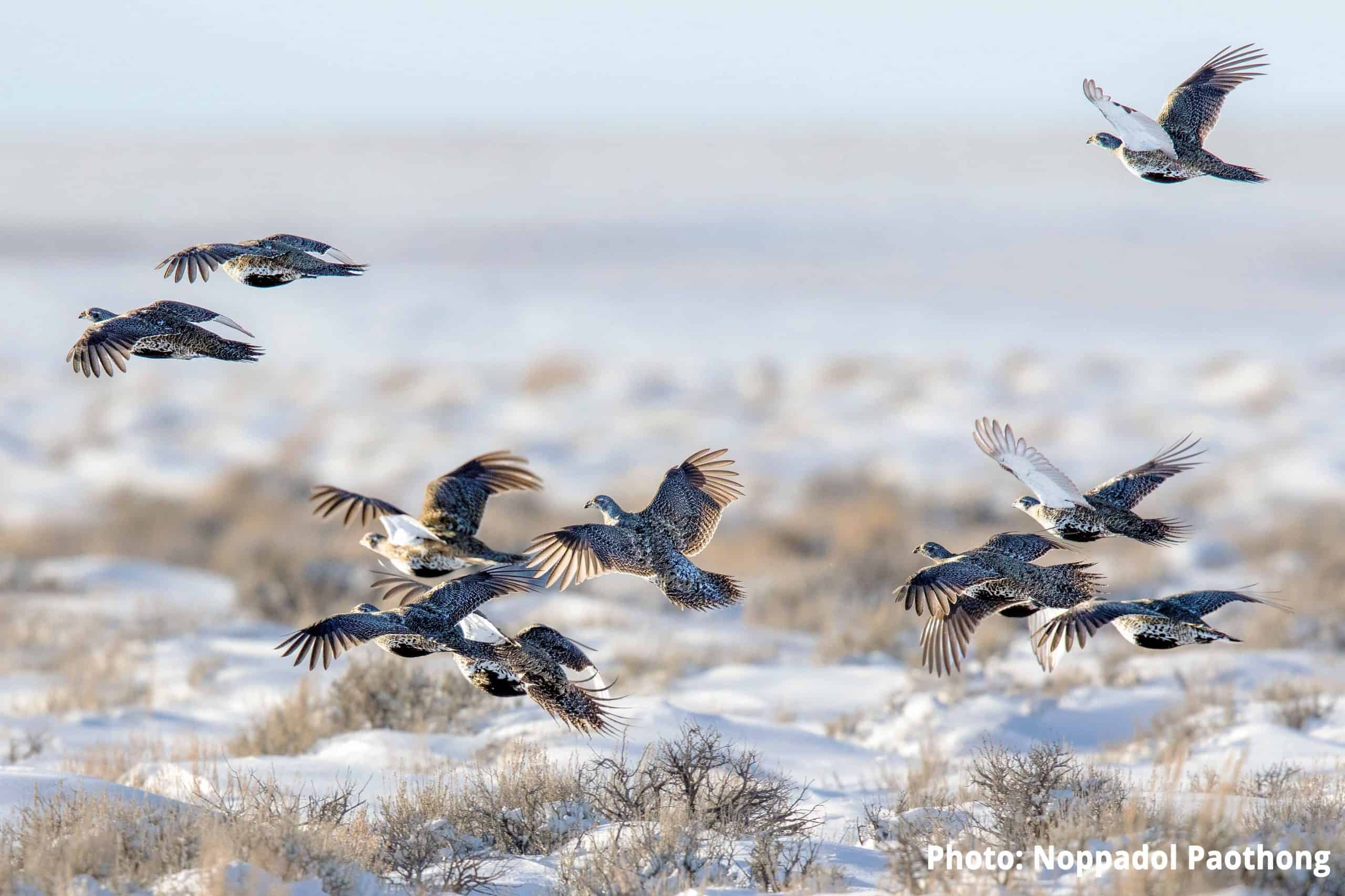 Each spring sage grouse return to their breeding grounds, called “leks”, to perform an elaborate courtship. This ritual ranks as one of the top wildlife wonders of the world.

From March through May, dozens of males gather as the sun rises to display for females and vie for dominance. Males inflate and deflate twin bright yellow throat sacs to make a strange popping sound, like champagne bottles opening. They strut and fan their spiky tails, occasionally battling each other with their wings.

As the males perform their ancient dance, females watch from the cover of nearby sagebrush. A few dominant males tend to receive almost all the attention from the females. Hens watch males for many mornings before choosing a mate (yup, it's ladies' choice!).

After mating, hens fly off to nest in the surrounding sagebrush to make their nest on the ground, typically under a sagebrush shrub a few miles from the lek. Hens lay 6-10 eggs, and often attempt a second nest if the first fails (typically from predation). She feeds on surrounding plants and insects while incubating her eggs.

The chicks hatch after about 4 weeks, covered in down with their eyes open. Survival rates for sage grouse chicks vary but typically less than half will make it to winter.

By 5 weeks old, chicks are relatively good flyers. The broods will stay together for nearly 3 months. The chicks are voracious eaters, following their mother out of the nest in search of insects and wildflowers.

As upland sagebrush habitats dry out over the summer, broods are drawn to riparian areas, springs, wet meadows, irrigated fields, and other wet, green spots where they can dine on wildflowers, ants, beetles, and leafy plants.

Chicks seek out these wet (mesic) habitats for the “green groceries” that help them grow. On a summer day, hens and their broods will forage for tasty leaves in the early morning, rest during the heat of the day, then resume foraging until twilight, when it’s time to find a safe place to roost on the ground.

Sage grouse juveniles are about two-thirds the size of their adult size by fall and can follow the hen for long distances. Fall is a time of transition, as sage grouse continue to stock up on protein-rich foods found near lush vegetation but also begin eating more of the plant that sustains them through winter: sagebrush.

Most birds have left their summer ranges by late October, making their way toward winter range where there's less snow. The lengths the birds migrate varies greatly depending on the amount of snow an area receives, from no travel at all to the longest-known sage grouse migration: 100-150 miles from Canada down into Montana to escape deep snow.

By December, sage grouse have transitioned to a diet of strictly sagebrush. The leaves are very nutritious. In fact, unlike most animals, sage grouse tend to gain weight in the winter months! But not all critters can eat sagebrush. The leaves are full of harsh chemicals called terpenoids — the same basic chemical found in turpentine—that sage grouse are able to remove during digestion and excrete separately as a “cecal dropping,” which looks like a silver-dollar-sized drop of tar.

Sage grouse survive in some of the coldest, harshest climates in North America – they are tough! Sometimes the birds will burrow in the snow for warmth. Plus, sagebrush is great shelter, providing wind and snow blocks for the birds and other animals. From their perspective, sagebrush is a forest. Large groups of sage grouse often stay together in the winter. In some areas, it's not uncommon to see flocks of several hundred birds. Joining forces is a behavioral adaptation employed by many species that helps avoid predators.