Read about how volunteer-led, low-tech, process-based restoration of streams and meadows in the west is helping restore critical habitat for elk and other wildlife in this great story from Bugle, the magazine of the Rocky Mountain Elk Foundation. Reposted with permission. 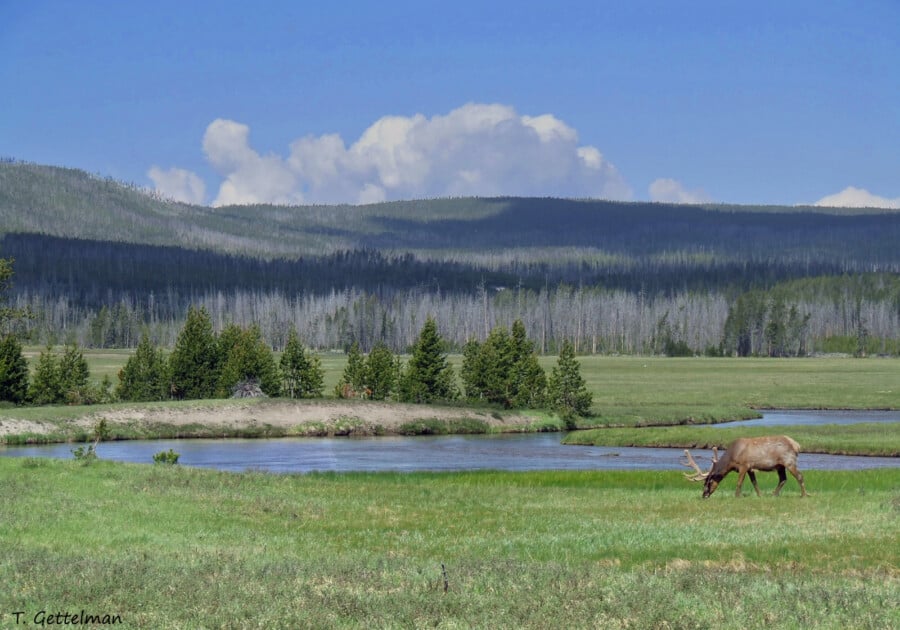 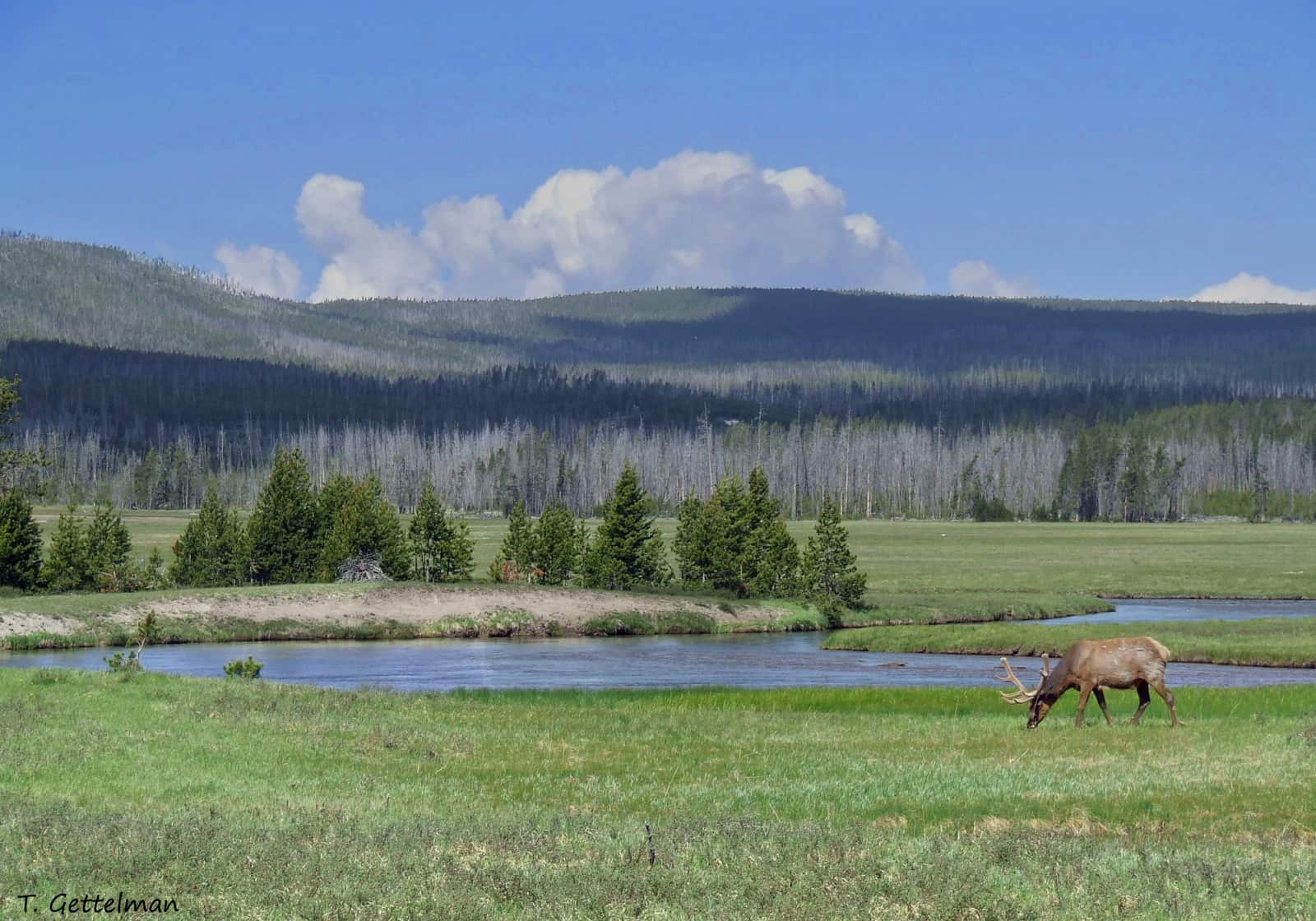 Photo of elk in wet meadow by Tatiana Gettelman, USGS.

This story was originally published in the July/August 2020 issue of Bugle, the magazine of the Rocky Mountain Elk Foundation. This excerpt is proudly reposted here with permission.

Elk suffer when streams and floodplains dry up. So do ranchers who need clean water and lush meadows. Stick by stick and stone by stone, low-tech stream restoration is providing a great boost to wildlife, livestock and people. And the next project is just a weekend’s work for volunteers.

A days-old elk calf looks up from munching on lush spring grass, all knobby knees and big ears as it stares down a trail camera a few inches from its velvety nose. Behind the wildflower-strewn Colorado meadow where it’s feasting, sagebrush cloaks the green hills. But those hills will turn brown in the coming weeks as summer sucks moisture from the soil, leaving this calf to seek out any remaining emerald islands amidst a sea of parched rangeland.

Elk, along with 80 percent of all wildlife species, need access to wet, green places. In fact, multiple studies across the West show most elk stay within a half-mile of water from spring through fall. But this vital wet habitat now comprises less than two percent of the total landscape. Scientists estimate that people have eliminated 70 to 95 percent of the West’s riparian areas over the past 200 years. On top of this loss, nearly half of our nation’s streams aren’t nearly as healthy as they should be.

“I can’t emphasize enough the importance of protecting and restoring riparian areas,” says Tom Toman, who helped lead RMEF’s habitat stewardship work across elk country for more than two decades before retiring earlier this year. That was his second retirement. Before all that, Toman spent 25 years as a wildlife biologist and conservation officer for Wyoming Game and Fish.

During the spring, nursing cows and their calves seek out boggy meadows to feast on the cornucopia of high-protein, high-moisture grasses and forbs. Aspens and other riparian trees provide cool shade during the summer heat. During the fall rut, bulls head for those same wet meadows to wallow and slather themselves in rank mud. And when deep snow settles atop mountain peaks, elk migrate to the milder climate along river bottoms to find food.

Muddy hollows and lush meadows weren’t always so scarce. Historically, side channels and sloughs meandered willy-nilly among creek and river bottoms. Dense galleries of willows and cottonwoods filled the valleys of the American West. Beavers were abundant, industriously building dams that spread water across the floodplain. Their ponds once stored enough water to cover all of Washington, Oregon and California combined.

Then the early pioneers moved west. They staked homesteads along streams where the soil was fertile and water was plentiful. Towns grew up in the temperate valleys. People drained wetlands, dammed rivers and channelized creeks to create irrigation systems and tame floods. They killed beavers on a staggering scale, reducing the rodent’s population by up to 90 percent by the end of the 19th century.

Luckily for that knobby-kneed elk calf and others like it, the Rocky Mountain Elk Foundation and its many partners are enhancing the wet meadows, creeks and rivers that sustain the wildlife and people who depend on water out West. Even better news: a suite of tried and true, low-tech restoration techniques—simple, hand-built structures made from rocks, wood and even mud—are working to make elk country wetter and greener. 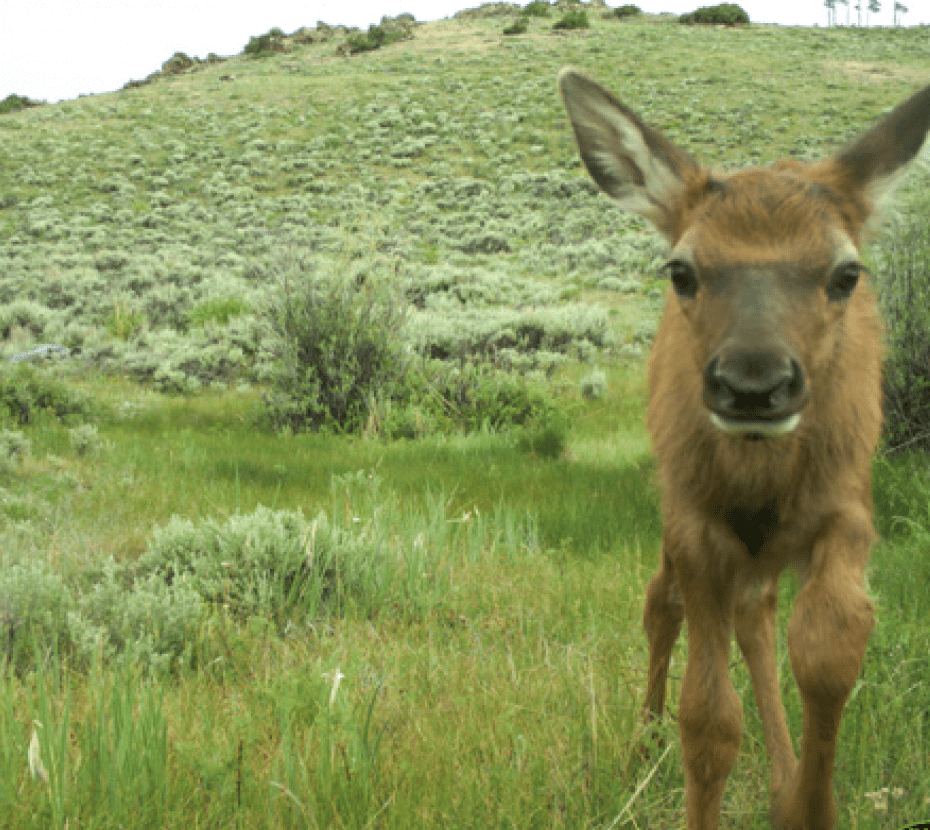 An elk calf in a restored meadow. Photo courtesy of Colorado Parks and Wildlife/RMEF.

In the United States, we collectively spend around $15 billion per year to help heal degraded rivers and streams—and we’re hardly scratching the surface. Traditional restoration projects are often high-tech engineering endeavors involving heavy machinery, concrete or metal that are built to last for a century. They also cost a pretty penny and can take years to orchestrate.

Instead of relying on bulldozers and backhoes, conservation groups and government agencies are increasingly working together to find simpler ways of kickstarting a watershed’s natural recovery processes, mainly through slowing down the flow of water. That can be as simple as weaving branches through posts placed in the stream channel to mimic beaver dams and create ponds, or interlocking rocks by hand to form steps that create pools. Imagine kids building “dams” during the summer in your neighborhood creek, then simply scale up the size of the sticks and stones. These structures spread water across the floodplain where it can be stored underground in the soil, leaving the landscape better equipped to handle floods, fires and drought. Low-tech restoration typically works best for small or intermittent streams, such as the thousands of draws that elk (and hunters) adore that streak through the West’s vast sagebrush sea. Inside these veins flow the lifeblood of the landscape.

Picture walking across a lush meadow in pursuit of a bugling bull. Suddenly, you come upon an abrupt change in the landscape: the slow, meandering creek has become a mini-waterfall, its banks brown with raw soil as the grass crumbles into the water. This nick into the flesh of the meadow is called a head-cut. If left untreated, it will relentlessly carve its way upstream when water rushes over the lip of the cut during heavy rains or spring runoff from snowmelt. As the banks erode, the creek drops into a narrow and constantly down-cutting channel, lowering the stream level and taking the groundwater with it. The shallow-rooted grasses begin to dry up, and deep-rooted sagebrush and other drought tolerant plants move in from the uplands. A head-cut can turn a hunter’s favorite green meadow brown in just a few years.

Head-cuts abound in elk country, often caused by human alterations to the landscape. Dams, roads, fire suppression or overgrazing have in many places starved our waterways of their natural “diet” of wood, dirt and rocks. The results are streams that are more prone to erosion because they flow too straight and too fast. Not only do wildlife suffer when floodplains shrink, so do the ranchers who rely on flowing creeks and wet meadows filled with prime livestock forage.

The good news is that reversing a head-cut and turning a meadow green again is relatively easy once you know what to look for—all it takes is a little sweat and some tired muscles. Building low-tech meadow restoration structures is surprisingly simple. By strategically placing natural materials into a stream near a head-cut, a small crew of people can bring a creek back up to its original level where it can re-water the floodplain. 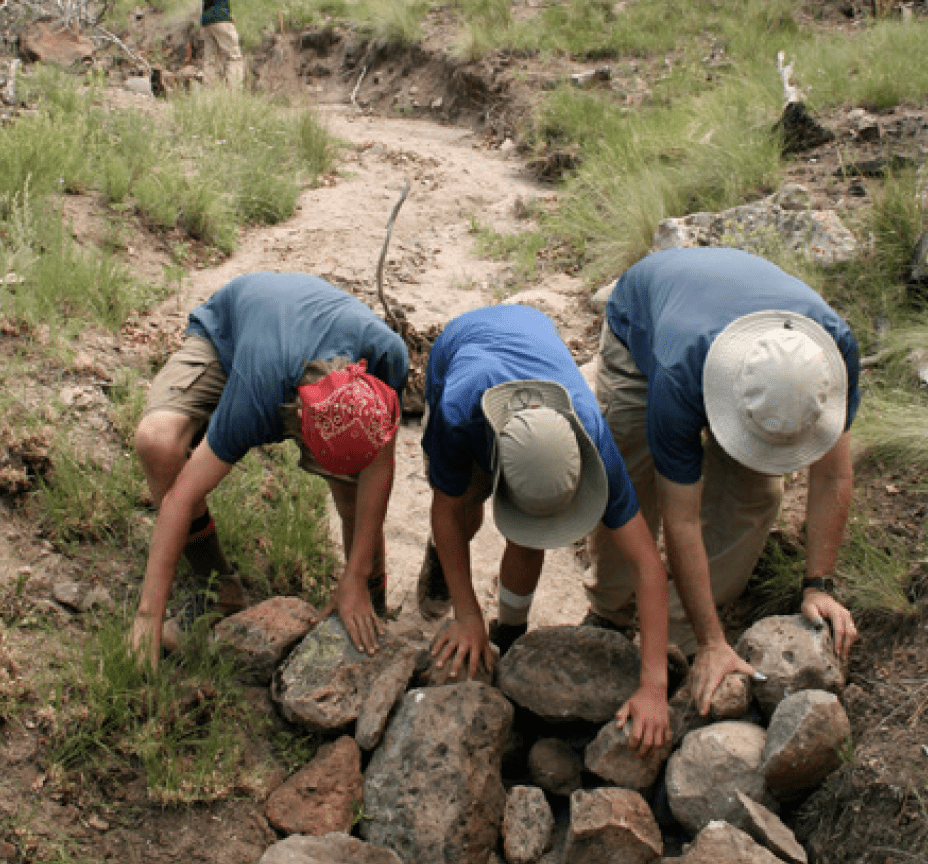 Volunteers with RMEF build a low-tech Zeedyk structure to stop a stream from head-cutting. Photo courtesy of RMEF.

Reconnecting streams to their floodplains is like putting more water in the piggy bank for everyone—wildlife, livestock and people—to draw upon when the rains stop and the snow is long gone from mountain peaks. Since most of the structures can be built in a day by volunteers with materials found on site, their price tag is less than one-tenth the cost of traditional restoration projects.

A 2018 study by researchers from the University of Montana and the Natural Resources Conservation Service (NRCS) found that these simple stream and meadow restoration techniques increase vegetation productivity by up to 25 percent. The results also show that simple rock or wood structures keep habitat greener for several months longer per year compared to unrestored sites.

“These low-tech projects produce amazing outcomes on a shoestring budget,” says Jeremy Maestas, an NRCS ecologist who co-authored the study. “By restoring ecological processes with sticks, stones and beavers, you end up storing more water and producing more vegetation, which benefits wildlife and livestock.”

The NRCS provides resources that help ranchers enhance wet habitat on western rangelands through its Farm Bill conservation programs and efforts like the Sage Grouse Initiative. Like elk, sage grouse hens and their growing chicks rely on the green groceries near wet meadows and riparian areas during late summer and fall. With their population now at less than 500,000—down from the estimated 16 million sage grouse that roamed the West just two centuries ago—North America’s largest native grouse need all the help they can get. Without enough high-protein insects and forbs, these chicken-sized birds—especially their chicks—are less likely to survive the winter.

In addition to research and providing matching funding for stewardship projects, the NRCS also hosts low-tech restoration training workshops around the West in partnership with universities, non-profits and resource management agencies. These hands-on field workshops feature seasoned ranchers who tell participants how low-tech restoration made their streams flow year-round again. They teach others how to design and build structures so they too can improve wet habitat in their own backyards… 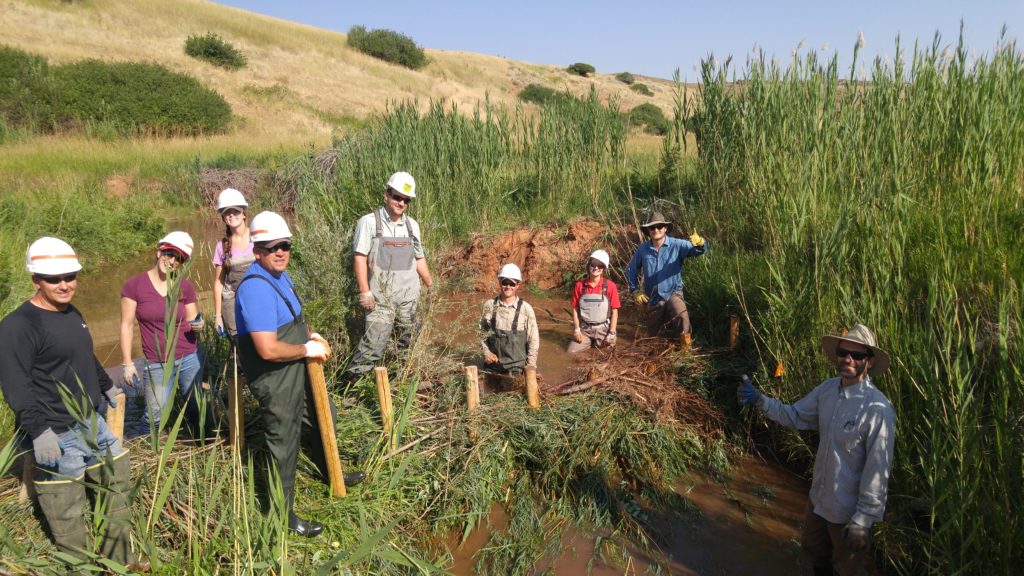 >>Read the rest of the Bugle story here<<

What is Low-Tech Stream Restoration?