How much forage have you lost to woody species? The Rangeland Analysis Platform can help quantify forage loss and pinpoint where to invest conservation funding. Join the NRCS for a free webinar about using the RAP to incorporate economics into area-wide planning on February 25 at 3 p.m. ET.

How much forage are producers losing to woody species? The RAP can provide answers. Photo: ShutterStock/Max Voran

How much forage are producers losing to woody species? The RAP can provide answers. Photo: ShutterStock/Max Voran

How much forage have producers lost to woody species? The Rangeland Analysis Platform can provide answers. Photo: ShutterStock/Max Voran

The NRCS hosted a free webinar about how RAP can help incorporate economics into area-wide planning efforts on Thursday, February 25 at 3:00 p.m. ET.

>>Watch an on-demand replay of the webinar here<<

Did you know that one out of every three acres in the U.S. is rangeland? Two-thirds of these rangelands are privately owned, mainly by ranchers who graze their livestock in the vast open country of the American West.

From the Great Plains to the Great Basin, our rangelands produce premium beef, quality wool, and creamy dairy. But it’s the plants that feed these livestock that are the foundation for profitable agriculture in the West.

But ranchers haven’t had a good way to measure how their grass is faring — until now.

The Rangeland Analysis Platform (RAP), developed in partnership with the USDA-Natural Resources Conservation Service, Bureau of Land Management, and the University of Montana, allows producers to track changes in the amount and types of plants (like perennials, annuals, or trees) growing on their property.

The RAP is a free online resource that provides easy-to-access data on vegetation trends across the West from the mid-1980s to the present day. Plus, this web application calculates how productive those plants are. A combination of long-term datasets show landowners how their lands have changed over time, which translates directly into how profitable their operation is. 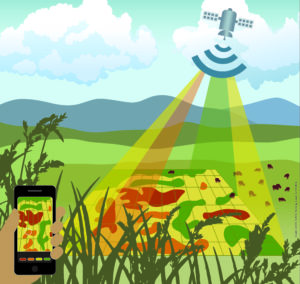 This free online resource combines current and historical satellite imagery with thousands of on-the-ground vegetation measurements and displays them near-instantaneously as simple graphs and maps.

“We can finally quantify outcomes of rangeland conservation in terms of dollars and cents,” says Tim Griffiths, western coordinator for the USDA Natural Resources Conservation Service’s Working Lands for Wildlife.

Farmers in the central and eastern U.S. have been using technology to closely track changes in crop production for decades. As soon as they see data showing that their plant productivity is declining — and revenues following suit — they can take steps to address the limitations and boost productivity again.

This technology can show ranchers the gap between their potential production and the actual production they realize in terms of pounds-per-acre of grass (typically called  “yield gap” in farming circles). It helps landowners understand how much they can potentially gain by changing management practices to boost available forage and close the gap. 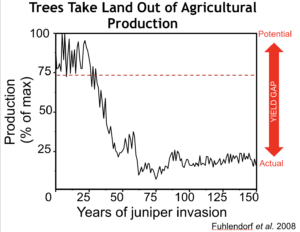 Landowners can see how their plant production has changed within a single month or over the span of several years. The technology can be used to visualize plant productivity in an area as small as a baseball diamond or over a landscape as large as several states.

“Basically, RAP can prevent lost revenues by showing producers where their land is less effective at growing grass. It helps ranchers put the right practices in the right places,” says Brady Allred, the researcher from the University of Montana who helped develop RAP.

One of the main threats to production and profitability on western rangelands is the expansion of trees onto grasslands. From eastern redcedar destroying tallgrass prairie to juniper marching across sagebrush grazing lands, woody species are costing producers millions of dollars in lost forage. 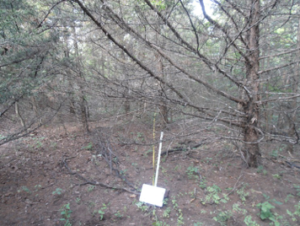 This used to be a Nebraska prairie. When woody species dominate a landscape, native grasses, shrubs, and other plants that wildlife and livestock need, can completely disappear. Photo: Courtesy of Dirac Twidwell

“Last year, we quantified that western rangelands missed out on tens of billions of pounds of forage due to trees taking over prairies and shrub lands since 1990,” says Dirac Twidwell, rangeland ecologist at the University of Nebraska and science advisor for NRCS Working Lands for Wildlife.

This yield gap, says Twidwell is “costing producers hundreds of millions in lost revenue each year.”

Take the Flint Hills of Kansas, America’s most productive grasslands and the fourth-largest intact prairie left in the world. In 2019, RAP shows that this region produced 21.3 billion pounds of forage.

But RAP also shows that ranchers in the Flint Hills were cheated out of another billion pounds of forage in 2019 due to encroaching trees. That adds up to nearly 800,000 round-bales of hay lost last year.

Put in terms of dollars and cents, those unwanted trees cost Kansas producers $8.3 million in lost revenue in a single year.

This graphic highlights the amount of forage lost in 2019 due to woody species expansion. Each small figure represents a different landscape scale. Image: NRCS

Stemming the tide of trees with technology

And in Kansas, ranchers are using RAP, along with Farm Bill funds and technical know-how provided through NRCS’ Working Lands for Wildlife, to cut trees across ownership boundaries to restore prime grass grazing lands.

New technology like RAP is exciting because it helps all of us “help the land” in order to sustain wildlife, provide food and fiber, and support agricultural families long into the future.

Learn more about RAP and what it can do for you: watch an on-demand replay of the NRCS’ webinar about incorporating RAP into area-wide planning here. 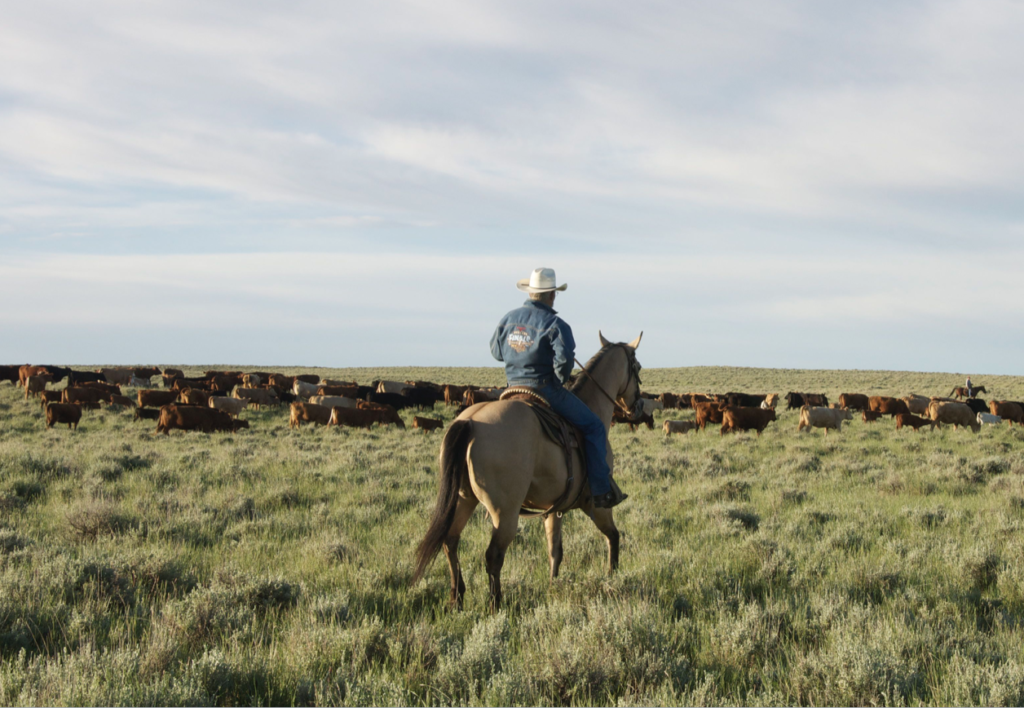 Getting the most forage per acre is important for producers, but stemming the loss of grasslands and sagebrush range due to woody species encroachment benefits wildlife, too. Photo: MT Stockgrowers Association.