Almost like magic…How beavers boost streamflows and restore habitat with a little help from humans. 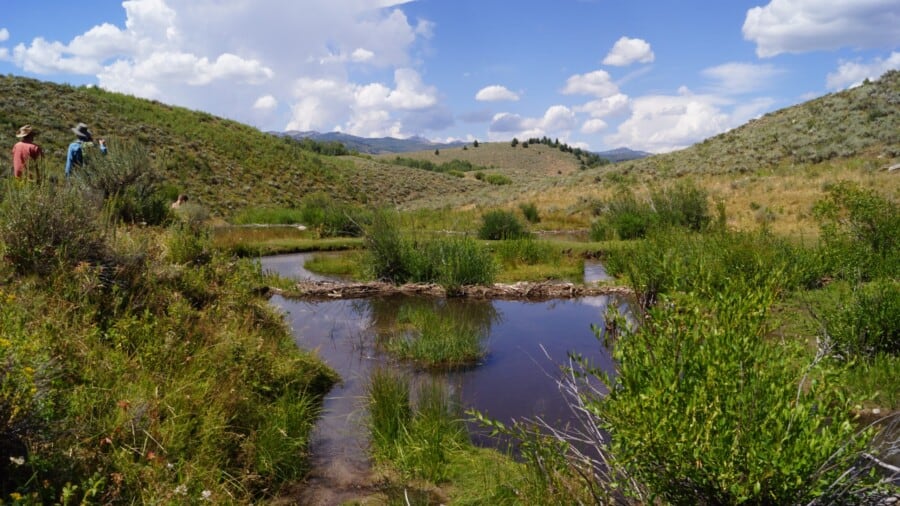 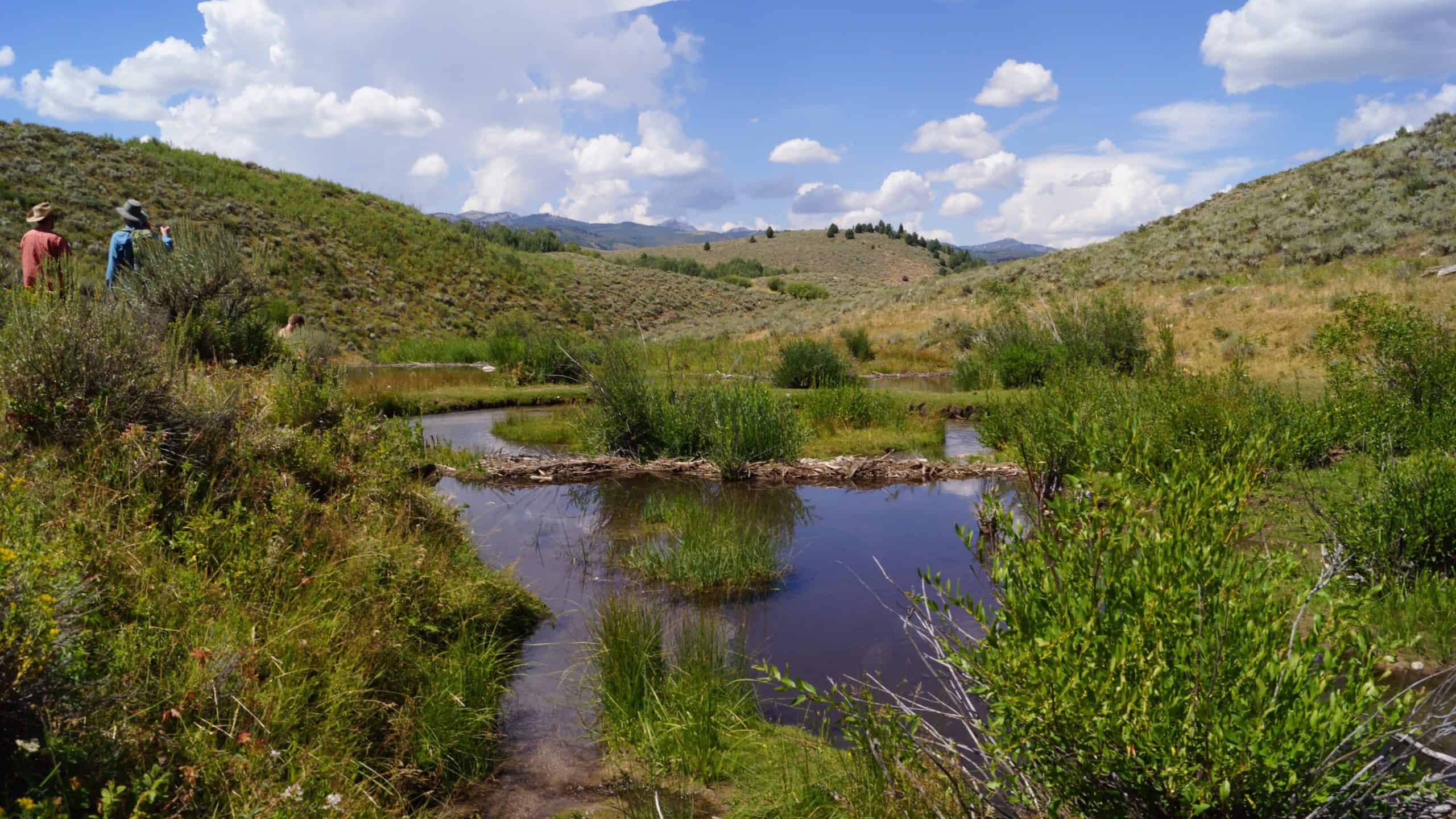 This post originally appeared on the National Wildlife Federation’s blog on January 8, 2020. We are reposting this edited version here with permission. Photo: A natural beaver dam in Idaho, SGI.

Thirteen years ago, Idaho rancher Jay Wilde sat in his kitchen sipping coffee before dawn. As the caffeine kicked in, he was once again pondering why the stream running through his ranch had stopped flowing.

When Wilde was growing up on the ranch, Birch Creek had flowed year-round. He used to spend summers fishing for trout and swimming in the ponds created by beaver dams. But Wilde hadn’t seen beavers or their dams since 1995, when he moved back to take over the ranch from his parents.

“I began researching the role of beaver, and learned that for a watershed to be healthy, there needs to be beavers there,” says Wilde.

Beavers are some of nature’s best engineers. They gnaw down trees to create intricate dams and lodges as their shelter. In turn, their dams act to slow the flow of a stream, creating ponds that act like a piggy-bank that stores water for the ecosystem.

Beaver-created ponds help recharge the floodplain and raise the groundwater level. This allows water to trickle downstream long after snowmelt and rain taper off. Plus, these ponds provide an incredible diversity of habitat for fish, birds, and all sorts of other wildlife. 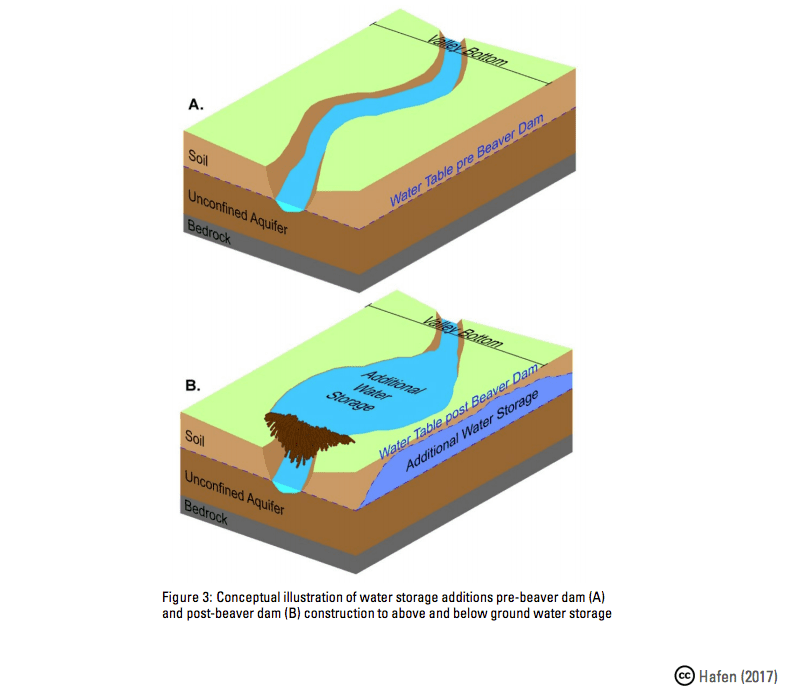 Yet many people regard beavers as a nuisance, since their dams can flood roads and clog irrigation ditches. That mentality—along with extensive trapping that took place prior to modern regulations—led to a marked decline in beaver populations over the past two centuries.

Even Wilde remembers trying to get rid of the rodents when he was younger. But now Wilde realizes that eliminating beavers also reduced the amount of water available for people, livestock, and wildlife. On his ranch, the lack of beavers meant he didn’t have enough water for his cattle to drink during the late summer and fall.

After his epiphany over coffee, Wilde tried releasing beavers on his property twice—in 2008 and 2009—in hopes of getting Birch Creek to flow longer in the summer. None of the critters stuck around, either succumbing to predators or moving off in search of better habitat.

Disappointed, Wilde instead partnered with the USDA Natural Resources Conservation Service (NRCS) to pipe water into tanks for his cows. Yet even with the stock-watering problem solved, Wilde still couldn’t let go of the idea that Birch Creek shouldn’t dry up.

“We just can’t throw our hands in the air and walk away. That’s not fair to all of the life that depends on the water,” says Wilde. 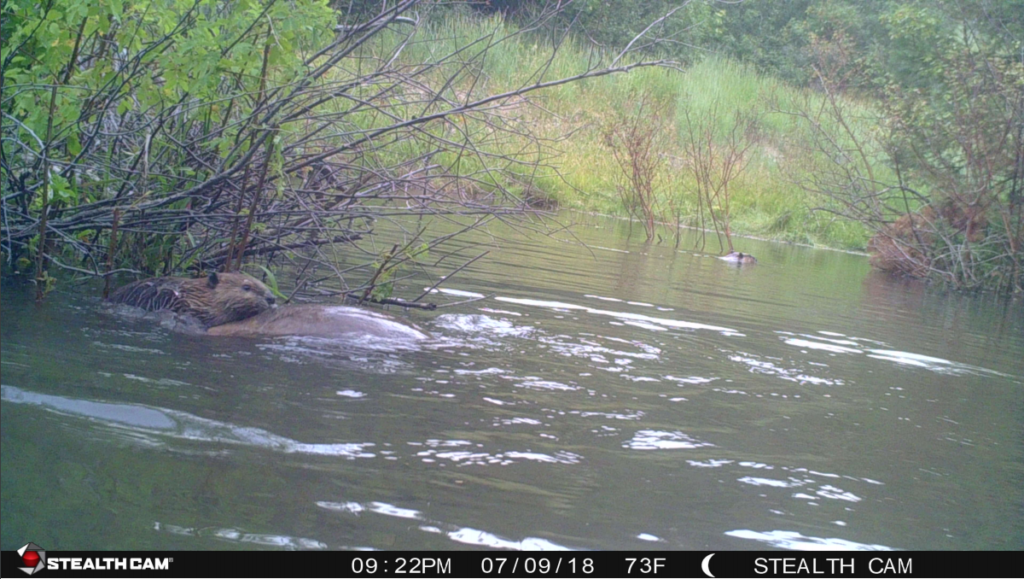 In 2014, Wilde came across an article about a new method for re-establishing beavers, featuring the work of Joe Wheaton from Utah State University (USU) and his colleague, Nick Bouwes. They had been using Beaver Dam Analogues (BDAs) to create suitable habitat for the rodents before releasing them.

Wilde promptly emailed Bouwes and Wheaton, who visited the ranch two days later to assess whether BDAs might help beavers set up shop in Birch Creek. According to Bouwes, the fatal flaw in Wilde’s initial attempts to re-introduce the rodents was because the stream lacked deep ponds to provide unfrozen winter habitat for protection from predators and a place to store wood in a food cache. 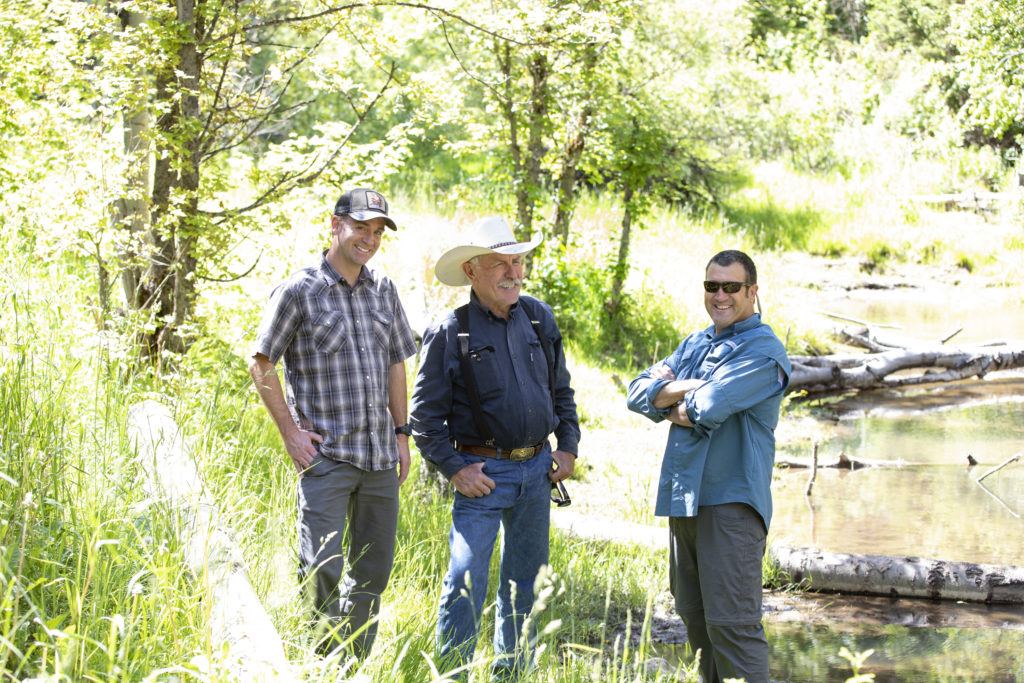 “They had no cover in that shallow stream, which meant they were walking hot dogs for predators like cougars and coyotes,” explains Bouwes, co-founder of Anabranch Solutions, which develops alternative solutions for restoring riverscapes.

By the fall of 2015, USU and Anabranch Solutions had helped Wilde build 19 BDAs. Wilde then partnered with the U.S. Forest Service and Idaho Fish & Game to relocate five beavers into Birch Creek—who promptly set up shop, initially using 15 of the new BDAs.

The next year, Wilde hosted a training workshop sponsored by the NRCS-led Sage Grouse Initiative (SGI). Since sage grouse—like most wildlife—rely on wet habitat during parts of their life cycle, SGI invests in low-tech methods for restoring streams on private agricultural lands. 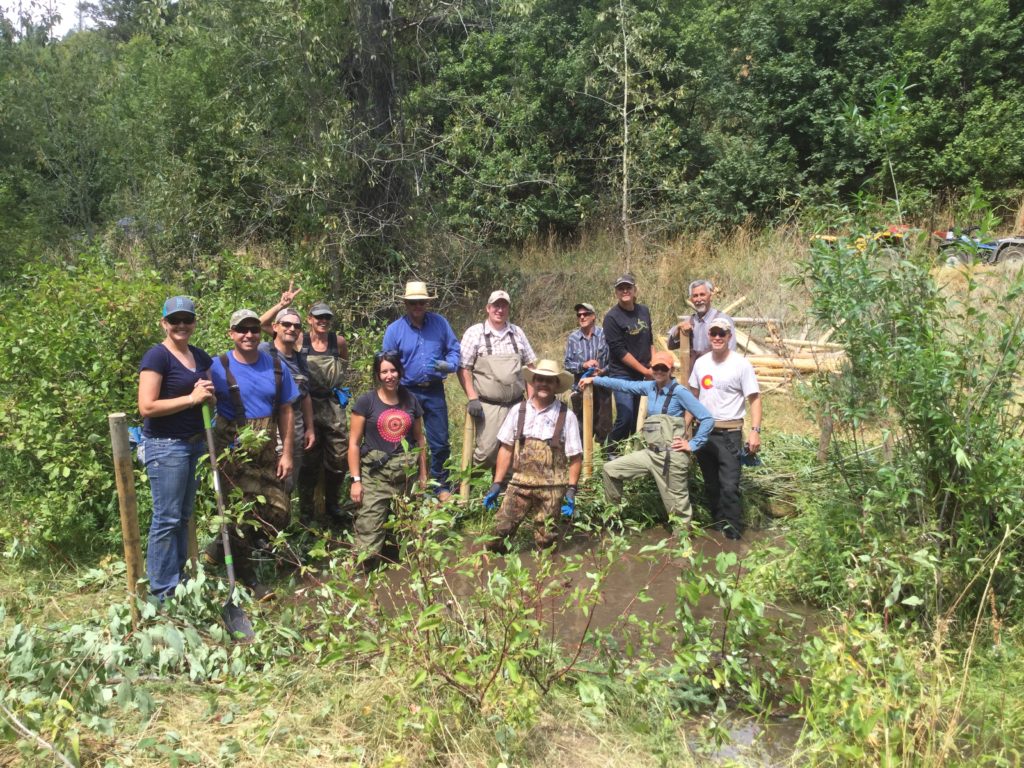 Over 40 natural resource professionals from across the West showed up to learn about beaver-assisted restoration. Workshop participants helped build seven more BDAs, and then Wilde released four more beavers.

According to Wilde, the stream once again runs year-round.

When you see the results, it’s almost like magic. It makes the effort worthwhile. ~ Jay Wilde.

And the outcomes go beyond streamflow. Bouwes and other partners have been monitoring Birch Creek’s Bonneville cutthroat trout populations, a species of special concern. In the ponded sections of the creek, the abundance of these native trout is 10 to 50 times higher than before beavers returned—a remarkable increase in fish populations just a few short years after beaver returned.

Wilde’s granddaughter, Emily Wilde, who also lives on the ranch and helped build BDAs and survey fish, was so excited by the beaver restoration project that she decided to pursue a degree in natural resource conservation at USU. 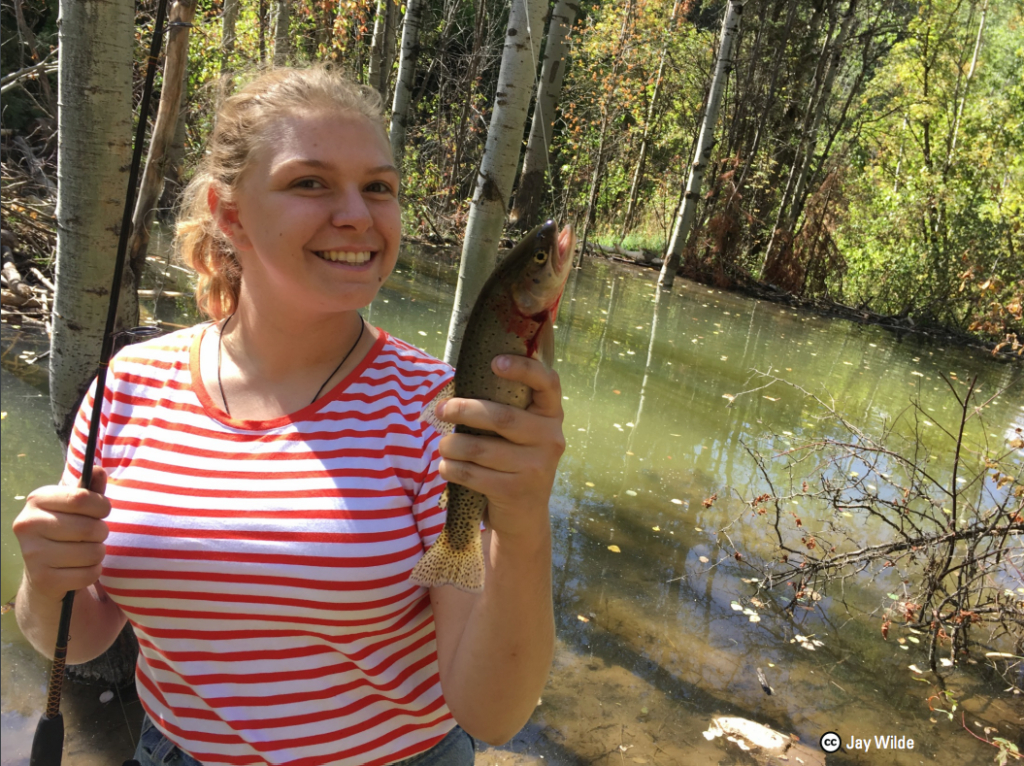 “One of the intangible benefits of hands-on, low-tech restoration is the buy in, which you can’t possibly get by sitting on the sidelines and watching someone else do the work,” says Jeremy Maestas, an ecologist with the Natural Resources Conservation Service who helped organize the 2016 workshop on Wilde’s ranch.

Becca Aceto, who works for the Idaho Wildlife Federation (IWF), agrees. She volunteered the past two summers to install BDAs in Josephine Creek on a ranch in Idaho’s Owyhee Mountains. Aceto was thrilled to see immediate results: an area that hadn’t seen water in several years filled up right after her crew put the finishing touches on a BDA.

Next up, IWF will partner with conservation groups to build BDAs on private land in the Pioneer Mountains as part of a collaborative effort to restore wet habitat burned by recent wildfires.
“Restoring water to arid regions benefits landowners as well as sportsmen by increasing habitat for wildlife,” says Aceto. “Bringing back beavers is a win for everybody.”